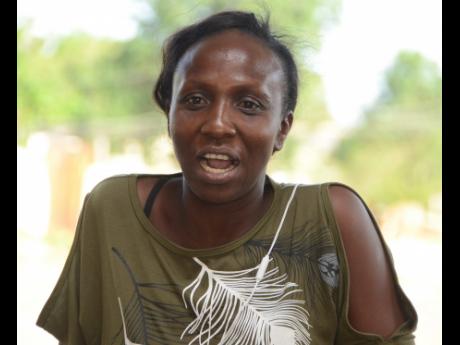 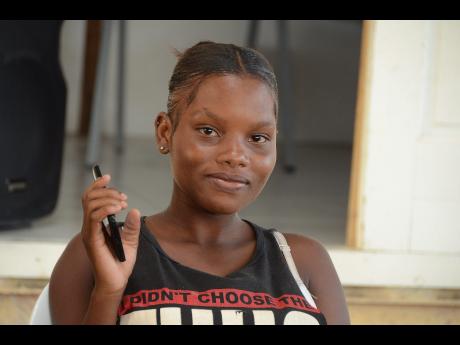 Kenyon Hemans
Moeasha is one of the young ladies in 'Top Temple' who Sophia Wright encouraged to return to school and she says she plans to.

At 43 years old, Sophia Wright did not fit into the demographic invited to the latest Gleaner/ RISE Life Management On the Corner with Unattached Youths forum in the east Kingston community of Rockfort last Thursday, but this was an opportunity that she could not allow to miss her.

The mother of four operates a shop in the area of Rockfort known as 'Top Temple', but her ambition does not stop there. Wright's main goal is to return to the classroom to further her education.

"When you have children, you're thinking about them eating, not going back to school," said Wright as she explained why she decided not to return to the classroom, and instead, opted to operate the small shop after getting pregnant.

"I went to a private high school, but it didn't work out because my mother couldn't afford it, so I do a year then end up going to a fashion-design school, and during the process of that, I learnt to sew, but I got pregnant," added Wright.

Without formal education, Wright accepts that her options are slim as she would most likely have to accept a job that pays in the region of the minimum wage which is to be increased to $7,000 shortly.

She said that she has taken the first step in fulfilling her dream by registering for the course, but now has to choose between using the little money she has to send her two young children to school or paying her school fee.

"The fee is $23,000, so I have to think about paying that and my younger children school fee. But I will still try because without a work that pays more than minimum wage, it's hard to send the children to school," she said.

She further explained that once she is able to fulfil that dream, she is confident that she will be able to give her children a better life and leave the sometimes-volatile community that she resides in.

"Rockfort is like a time bomb, because it can be cool now, then something happens again, so I would really like to leave," said Wright, as she reminded the youths at the forum that education has no age limit.

She also encouraged the young female residents to try and further their education even after having a child.

"A lot of girls in the community have baby at a young age and stop going to school and after a while just give up on school altogether. We need more women in the community who can show them that despite their circumstances, they can go back to school," declared Wright.