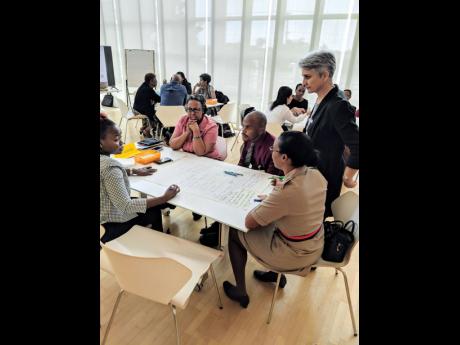 Ulla Wycoff-Tomlinson (standing) facilitates the group discussions at the Canadian High Commission's workshop, "Conversations on Gender: The Role of Gender in Building Climate Resilience" on June 26. 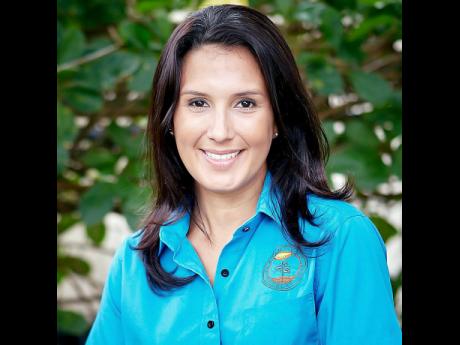 LAURIE PETERS, the high commissioner of Canada to Jamaica, is the latest to add her voice to the need to consider gender in planning for climate change and its impacts, which range from warmer global temperatures to extreme weather events, the likes of which were experienced last hurricane season.

"The Caribbean is seen as one of the most exposed regions to natural disasters, a situation that will be exacerbated by climate change. Jamaica and other countries of the region need to take action to adopt measures to reduce vulnerability and enhance resilience. Considering gender and an inclusive approach will be key," she said.

The inclusion of women and girls into the discourse and planning for climate change, she said, constitutes a climate-smart approach to resilience building.

"A climate-smart region promotes environment and climate action by advancing women's leadership and including women and girls in the planning and decision-making process. It is our hope that this inclusive approach will support initiatives that will both mitigate and adapt to climate change and also create economic opportunities for women," the commissioner noted.

Canada is doing its part in helping to realise that end.

Last month, the high commission, together with Global Affairs Canada, convened the second in a series of conversations on gender with the focus on the question, "How will we together ensure that in building climate resilience in Jamaica gender is effectively addressed".

Held on June 16, the conversation, which took the form of a workshop, attracted the participation of 18 represen-tatives from the Climate Change Division of the Ministry of Economic Growth and Job Creation; the Bureau of Gender Affairs; the Ministry of Finance and Public Service; the Jamaica Environment Trust (JET); the National Environment and Planning Agency; the Combined Disabilities Association; the Jamaica Defence Force, and the Office of Disaster Preparedness and Emergency Management, among others.

Chief Executive Officer of the JET Suzanne Stanley said the discussions were informative.

"It was a very lively discussion, very informative. I had actually just returned from a similar discussion in Barbados earlier in June, and that was by the Commonwealth Foundation. This really seems to be the topic of the moment - a theme that has come out of the last few COPs (Conference of the Parties to the United Nations Framework Convention on Climate Change) - and where significant focus is being placed on the intersectionality between gender and climate change. The discussion raised a lot of things I had not previously considered in the climate-change discourse," she said.

"In terms of incorporating it in to what we do at JET, we are increasingly being asked by donors to consider gender in the development of our projects, and although JET has always taken an inclusive approach to the delivery of environmental education and advocacy, this discussion has really facilitated us creating more focus in how we do that," she added.