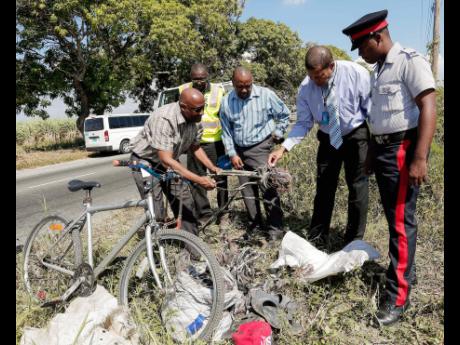 Contributed
In this January 2016 photo senior FLOW officials are joined by a member of the Jamaica Constabulary Force as they examine remnants of the company’s cables which were vandalised in Old Harbour, St Catherine. 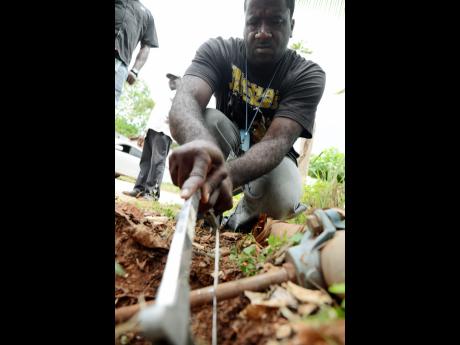 Rudolph Brown
Lamont Murray of the NWC disconnects a pipe on Fletcher Street in Kitson Town during an anti-theft operation recently.
1
2

Utility providers operating across the island want stronger legislation to identify and punish thieves and others who obstruct service delivery.

Among the companies is the National Water Commission (NWC), which continues to battle water theft and faces a particular challenge in the laying of charges against the thieves.

"But while the penalties have been increased, somewhere in the region of $500,000 that may be charged in a particular instance, we also have the issue where some of the provisions of the law do not allow for persons to be charged with some offences unless we catch them in the very act of doing the (illegal) connection, and that's not very likely," said Charles Buchanan, corporate public relations manager at the NWC.

He was one of four panellists at a special webinar hosted by the Office of Utilities Regulation last week, which explored the impact of theft on the provision of utility services.

Buchanan pointed out that other charges, with lesser penalties, are applied, for example, trespassing on the work of the NWC.

According to Buchanan, another problem faced by the NWC and other utility entities is the sympathy shown towards offenders by their neighbours.

"So the utility [provider] that catches somebody stealing from them, many feel that we (the utility provider) are the villains, for catching someone stealing from us. There is a need for a social revival, a values re-emergence, something ... that will enable us to see that some things are wrong," declared Buchanan.

The NWC has been ramping up compliance efforts this year by taking court action against 25 delinquent customers between January and March but most of the matters are still pending trial.

Telecommunications provider FLOW is also troubled by the soft penalties imposed in cases related to theft and vandalism of equipment.

Data provided by FLOW indicate that over the past decade, 67 cases have been taken before the courts, resulting in 31 convictions. Ten of the offenders were each fined less than $200,000, 12 received prison terms, with the majority being for less than a year, while nine got suspended sentences. Five arrests were made this year and the cases are still before the courts.

"The point must be made that while we have so many incidents of vandalism, we continue to see low conviction rates, and that again is a serious concern for us. ... If the sentences are not sufficient to act as a deterrent, we will continue to see the repeated cases of vandalism and theft on our network," said Kayon Mitchell, FLOW's director of corporate communications and stakeholder management.

Mitchell added: "[When] we look at the restoration cost ... we are now in the region of US$1.9 million (J$253 million). So it's very clear that this is a significant issue and [it] has a major impact on us financially."