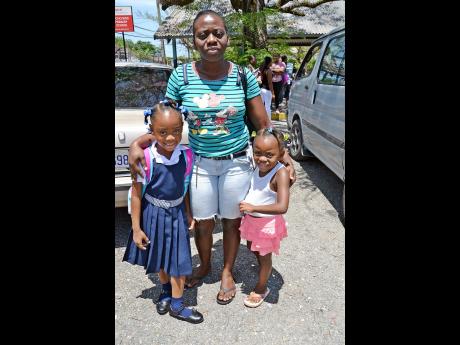 Carl Gilchrist
Kimberlyn Gooden (centre), with her six-year-old daughter, Duvanique Cousins (left), as she turned up for classes at Ocho Rios Primary on Monday, accompanied by her four-year-old sister, Khadeesha Cousins. 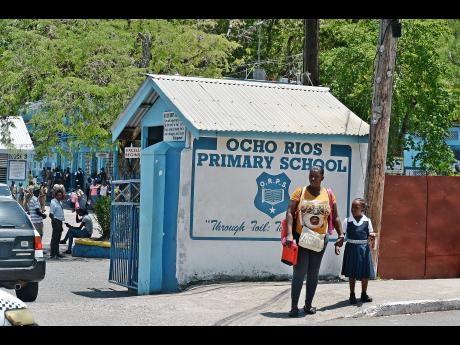 Carl Gilchrist
A lady and a girl wait to cross the street after leaving the compound of the Ocho Rios Primary School on Monday.
1
2

There were no complaints reaching The Gleaner in St Ann as schools reopened for the new academic year on Monday.

Several high schools contacted have reported no concerns for the new year.

"Things are going better than I thought they would," Sterling reported.

It was the same at York Castle High School in Brown's Town as Principal Raymon Treasure said things were "going well".

Treasure said the school used the summer to adequately prepare for the new term, and even though the numbers were up significantly, things were going well.

"We're in a good position right now," he confirmed.

It was more of the same at the primary level as schools reported a smooth start to the opening day.

At Ocho Rios Primary, parents turned out in their numbers, taking their children to school. One parent, Kimberlyn Gooden, who took her six-year-old daughter, Duvanique Cousins, to school, said there were no real complaints and things were OK.

A spokesperson from the school reported a "smooth opening," adding that everything was good so far.

Over at St Ann's Bay Primary, principal Trevor Cole confirmed that the opening day was one of the better ones in recent time, with things going quite well.