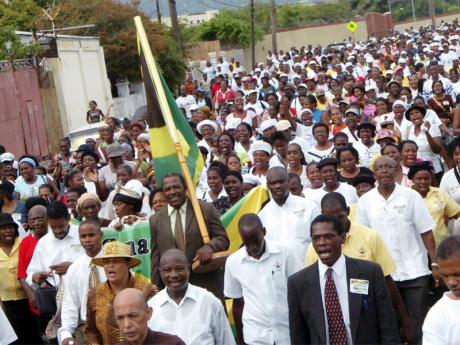 Church members march down west Heroes Circle in Kingston after worship at the National Heroes Park in 2008 under the banner 'Emancipate Jamaica'. On October 27, Maranatha Ministries International will lead a march under the banner, 'Jesus in the City Jamaica'. File

Pastor Bobby McIntosh of Maranatha Ministries International is adamant that there will be no gyrating of hips at the massive Jesus in the City Jamaica parade, scheduled for October 27, but said instead, the event will be perfect for persons yearning to lift their voices onto Jesus.

McIntosh said that those gathered on the Waterfront in downtown Kingston following the march should come expecting good entertainment, but no party.

“Entertainers are on board. When we all get to the Waterfront, there will be a lot of prayer and a lot of worship, with choirs and all that. We want people to come before God and cry out. We are the very opposite of carnival. We won’t be revelling in flesh. The only thing similar to carnival will be the big crowd. Our floats will include representations of bible characters. It is strictly a biblical thing,” he insisted.

Because states of emergency are in place within designated areas, the final route for the parade has not been decided. However, the roughly 30,000 patrons and participants estimated will come mainly from Kingston, St Andrew and St Catherine.

“We have been on the road, building momentum. Right now, we are beyond the point of return. We are trying to unite all churches in Kingston, St Andrew and St Catherine and, by extension, the rest of Jamaica. We have many floats that have been paid for already. Come Friday of this week, we have a number of people coming in from overseas. We might even be having one person fly in from Africa. The mood is upbeat,” McIntosh told The Gleaner Wednesday.

Pastor Jacqueline Miller of Maranatha, who is a key figure of the Jesus in the City Jamaica organising team, explained that the Commissioner of Police Antony Anderson is in full support of the event.

“We are prepared spiritually. We are working out all the logistics with the police. The commissioner of police is in support of what we are doing. We have a final meeting with the relevant authorities on Monday to ensure all is in place for the security of the event. We are expecting a dynamic move of God. In terms of what is happening with crime, violence and stress, we believe that this is the time for this. We do believe that bringing high praises will actually help to change the atmosphere and bring that release of peace and love. Let God be lifted up in our nation. We want any and everyone to come out. The Church is really the people of God. The Church has been called to be a light for the world. Be a part of what God is doing in Jamaica.”

Pledging full support, Professor Trevor Munroe of the NIA told The Gleaner yesterday that, "Pastor McIntosh, in reaching out to NIA, indicated a central purpose of the parade: to help ‘restore spiritual and moral excellence to the nation’; a purpose which aligns perfectly with NIA's mandate to ‘strengthen integrity’ amongst our people. We regard support for this parade as one element in a growing partnership between NIA and the Church aimed at isolating violence producers as well as facilitators."