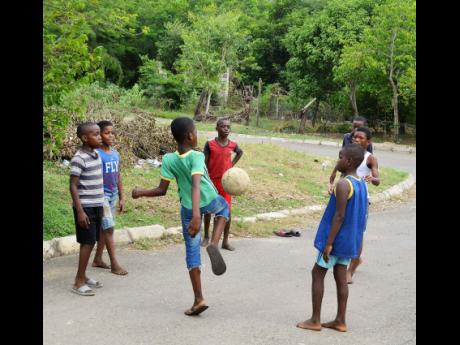 When I was a boy, we played Under-17 and Under-20 football competitions sponsored and organised by the Social Development Commission (SDC). Others played basketball, while the females participated in netball.

St James parish finals but finished third place in the all island under-20 football competition.

Why is this significant?

Winning the U-20 finals against Altobar from Barrett Town was excellent for us. We were jubilant and delighted to bring the trophy up to Mt Salem and to be given the opportunity to represent the parish of

St James in the all-island competition. It was a good win for us, but an even greater victory for community integration for those who participated. Community engagement was the major winner. Through sports and other community integrating activities, the SDC was able to engage young people on a positive note, which helped to keep us away from crime and negative activity. Young people, male and female of different age groups were engaged with sporting activity that they could relate to.

It helped to inculcate a sense of pride and participation, and an understanding of teamwork that helped to develop solidarity and good interpersonal relationship skills that became useful in other aspects of life.

What is happening now?

I don't know if these competitions still exist, but they are certainly not visible. Most of the engagement in the city and surrounding environs is basically done in an effort to prepare a class of tourism and business process outsourcing workers.

Youth engagement has been marginalised to charity, and many corporate companies squabble to make it appear as if they are actively involved with youth engagement and empowerment, which sometimes seem to be more hype than substance.

For every dollar donated, the businesses subconsciously want to know what is in it for them. As outlined in a briefing similar to this last year, everything about the city is about business, not the people, when it's the people who cater to and make the businesses functional.

How could communities integrate?

Businesses could do more to integrate with the communities that service them with a key labour input. But it is rumoured that most businesses are partial to certain class of people or people from certain areas. Many will read this and know deep down we are victims of classism and disintegration.

Many want to be a part of the positive change but are subjected because we want to please society so we deny innocent people the opportunity to do what they do best because he/she is from, his/her age, or he/she is not a part of your lodge or whatever other discriminatory factor you people use to prolong your prejudice.

This is why many of the young people from the inner city bleach their skin because they believe it will make them more acceptable. It might not be acceptable in your eyes, but you have contributed to a system that perpetuates this. There is some level of classism or colourism, subliminal in these people's mind, that is like a dark shadow over the integrating prospects of the country. As a result, they fear instead of embrace inner city communities.

What about the infrastructure?

When young people are disengaged and disenfranchised, they will seek to engage themselves in other activities that might not be positive.

How can the issue be addressed?

Youth clubs, through partnerships with international organisations have continued to help engage young people in various communities through different project.

The Mandingo Youth Club, for example, in Mt Salem, Montego Bay along with the Mount Salem Junior High School has partnered with Zion Care International to help to integrate the Mt Salem community. The Peace Management Initiative has also played a role, but the efforts are fragmented community by community, with no real integrating aim like that of the SDC when I was a child. There must be a concerted effort to engage communities on a consistent basis to increase the participation of young people, not just within a specific community but across communities.

What will facilitate these linkages?

Sports plays a natural role in enhancing and integrating the learning experience of a child. Communities must be given the opportunity to intertwine sporting activities with education and wellness. This will allow participants to be graceful against competitors and become less aggressive about losing. They will also learn some off-the-ball skills, like organisational skills, patience and perseverance.