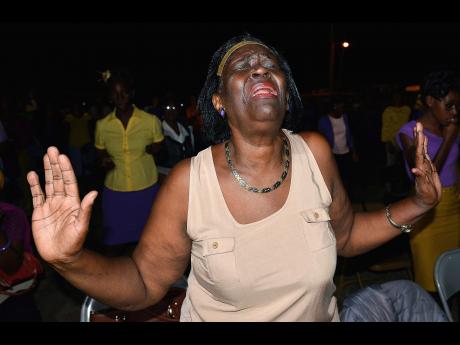 Kenyon Hemans
Deloria Satchell is deep in prayer as she welcomes the new year at the Port Royal's New Year's Eve church service. 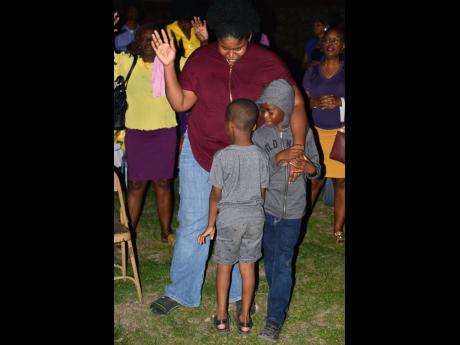 Some churches across the island decided to curtail their watchnight services or close their doors, in order to join the Reverend Jeffrey Shuttleworth and his team in Port Royal, Kingston, on Monday, for a time of prayer dubbed 'Freedom Come'.

Steve Clarke, a key organiser of the event, said it was important that the body of Christ joined together to pray for the leaders of Jamaica and intercede for national issues such as crime and violence.

"We looked at so many things that are happening in our country, the crime, in addition to many things which have been uttered. If our country is to progress and experience growth, we have to ask our leaders to be transparent in whatever they say and do," Clarke said.

"Do we feel comfortable when our leaders come and say this is what is going to happen? Is it true? We seek God to give us His guidance, so that we can stand up against lies. This is a mobilisation to say that we want God to lead us," he declared.

Clarke also said there was a renewed intention to focus on crucial entry points in Jamaica. He noted that Port Royal is a central point throughout the island.

"We don't want it to be a case where the people suffer because there was no vision. If we look at biblical history, it speaks of the east gate. Everywhere on our island has an entry. Most of our history has shown that everything comes from the east gate, the storms and everything that comes. We looked at Port Royal as one of the central points where a lot of things come into the country, for example, drugs," he explained.

"The airport is also a port of entry, and we believe that if God is to work, we have to go where the port of entry is."

In the meantime, the Reverend Peter Garth, pastor at the Hope Gospel Assembly in St Andrew, told The Gleaner during his church's watchnight service that they are still monitoring national issues, such as abortion.

"We faced the challenge of looking at national issues. The whole matter of what is upon us now, the joint select committee is looking at the matter of abortion. We feel strongly that the scientific evidence is saying that life begins at conception. If the scientific evidence is true, then it means that if we pass the law, then we will be passing a law for persons to commit murder."