Custos of St James will not be daunted 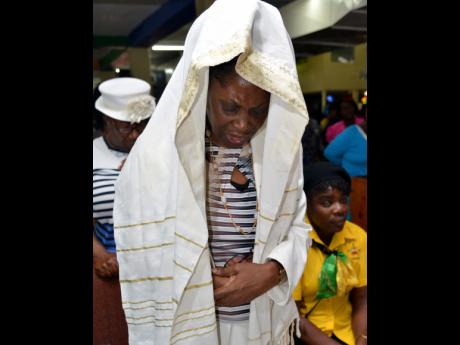 Kenyon Hemans
Ena (Tilly) Johnson, dressed in her prayer scarf, is overcome with emotion as she prays at the Power of Faith Ministries’ annual Heal The Nation church service held at the church’s headquarters in Portmore, St Catherine, on Wednesday.

Bishop Conrad Pitkin, custos rotulorum of St James, said he will be resolute in doing his part to make sure that the parish does not return to the dark days of murder and mayhem.

Up to December of last year, the parish had recorded 100 murders. That figure, however, is significantly lower than 2017's record of 335 murders.

The custos lauded the reduction but admitted that since the Opposition's decision to withdraw its support for the state of emergency (SOE) to continue in the parish, there have been high levels of uncertainty and anxiety.

"We have entered 2019 with uncertainties and trepidation. But one thing I stand here to declare is that my God is still God. There is none like unto Him. One thing I know is that though we are witnessing levels of confusion, disunity and disagreement, I still believe that the Church is united," he told the gathering at the 14th staging of the Heal the Family, Heal the Nation conference.

He told The Gleaner that he was encouraged by the reduction in the number of murders.

"If the (2017) trend had continued, we would have had more than the over 300 murders (in 2017). Think of the many less families that are mourning for the loss of a loved one. Young children who will have a father or mother. For me, that's an achievement," he continued.

He called on the people of St James and Jamaica not to shrink back in fear despite the uncertainties that surround the absence of an alternative to the SOE so far.

"The people of St James, as well as Jamaica, will have to unite, and we have to make a decision. Jamaica belongs to all of us as most of us are not going anywhere. We must be determined that we will not be going back to the dark days of the past. Yes, there are problems, but I am solution-oriented, and we must find a solution to go forward, and we must find a way to reach young people," he declared.