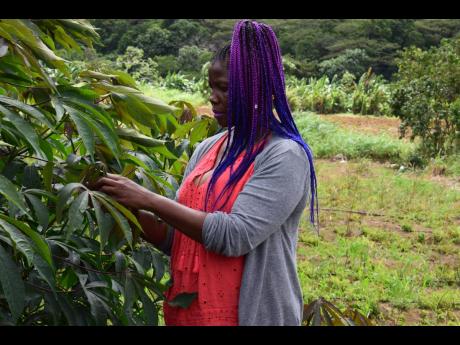 Charmaine Blair-Stewart loves her cassava plants. Her farm which is located in the Plantain Gardens Agro Park in St Thomas, which is at the foothills of the Blue and John Crow Mountains is approximately 11 acres; however, she pays close attention to the seven acres, where plants are located to ensure that they are always in the most pristine condition.

She maintains her nine varieties of cassavas because they have become her main crop. She is also grateful for the opportunity to participate in the ‘Project Grow’ a local sourcing initiative started by Red Stripe in 2013. The objective is to replace imported high maltose corn syrup with 40 per cent cassava starch in the company’s brewing process by 2020.

She states that the initiative saved her from chronic depression.

“More than five years ago, I lost my second husband two months and eight days after we were married and became extremely depressed to the point where I was diagnosed with post-traumatic stress disorder. I was extremely reclusive at the time and that lasted until I was introduced to the Red Stripe Project Grow Initiative and I started tending to my plants,” she explained.

“Since then, I have spent a lot of time here with the plants because being here is extremely therapeutic. I am also anti-social, and find that plants are easier to deal with than people. Therefore, I also talk to them daily as I prune or spray them.”

The mother of one became a part of the Project Grow Initiative in 2018, after learning about the programme at a co-operative meeting, at the agricultural park. She was immediately impressed with the initiative and allotted a section of her farm to participate in the programme.

“The experience has been good so far,” she related. “I was not in a right place before; and now, this has helped me to become settled, as a result of the challenge involved and the guidance I have received.”

“While I was growing up, I had no plans to be a farmer,” she affirmed. “Farming wasn’t my thing. My father used to say that the only times my hands touched the ground was when I fell.”

The former English Language teacher is now passionate about her current profession. She is on her farm from as early as 5:00 a.m. and sometimes as late as 7:00 p.m., depending on the number of tasks she needs to complete.

As part of the Project Grow Initiative, farmers are able to obtain financial assistance from JN Small Business Loans, which can be accessed through the JNSBL Climate Smart Loan, to purchase: high yielding drought resistant cassava sticks; fertiliser and drip irrigation, by way of equipment and installation at four percent per annum on the reducing balance. Farmers can also benefit from the Agricultural Loan Special, a programme, which allows the Development Bank of Jamaica to guarantee up to 80 per cent of the funds provided to farmers.

“I was at a Red Stripe forum and someone from JNSBL spoke about the assistance that farmers could receive,” she explained. “I was impressed with how the funds would assist me; and, it has helped me to invest in the farm.”

“Mrs Blair-Stewart has shown that persons can overcome hardships by doing something they are passionate about. We are, therefore, pleased that she found an avenue to help her to cope; and to provide employment for others. We salute her for her drive and passion,” Hyde said.

Stephannie Coy, project manager, of the Desnoes & Geddes Foundation, explained that a part of the Project Grow Initiative was to facilitate funding for farmers through financial institutions, which could assist them to expand their operations.

“One component of the initiative is to create an environment which facilitates conversations between farmers and financial institutions, so that farmers in the programme, such as Mrs Blair-Stewart, can meet their needs,” Mrs Coy explained, noting that, “They will be able to access funds at attractive interest rates; and benefit from a nine to 12-month moratorium. Therefore, we will continue to assist farmers in the programme as they play their part in developing Jamaica.”

The youngest of seven children, Blair-Stewart plans to expand her cassava farm to 100 acres, eventually growing all the nine varieties.

Blair-Stewart, who enjoys watching TV and playing video games on her phone during her spare time, has one advice for young farmers.

“Register with the Rural Agriculture Development Authority and be certified,” she advised. “It can open many doors for you.”