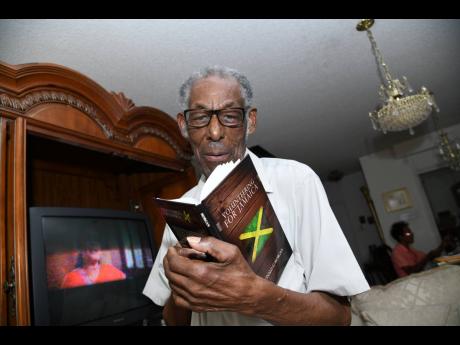 Rudolph Brown
Rudolph Brown/Photographer Professor Donald Morgan, seen here with his new book, ‘Volunteering for Jamaica’, has criticised the diaspora for not giving more to charities in Jamaica.

Jamaican philanthropist Professor Donald Morgan has taken a swing at expatriates who fail to donate time and funds to nation-building efforts in their homeland.

Morgan, a sociology professor whose Jamaica Volunteer Association Incorporated (JVA) has contributed millions of dollars to causes here, doesn’t disguise his disappointment in those who migrated and have never given back to their country. He said while some Jamaicans offer credible reasons for not being able to make contributions to the JVA, others are blunt, telling him upfront that they are no longer Jamaican citizens and that they are in need of help themselves.

“Jamaicans can do much better. There are many Jamaicans who are not doing anything to help their country,” he lamented.

His criticism centres on his perception that members of the diaspora don’t understand the civic importance of charity compared to their American counterparts.

“America was not built by presidents; it’s the people that build up America. A lot of it is voluntary service. I sat there in Washington and watched a man in DC spending millions of dollars to repair the Washington monument out of his own pocket, and that is a common thing in the United States,” Morgan, who recently authored a motivational book on volunteerism, recounted.

“The people themselves, the citizens, have to give, and so one of the things that I suggested in this book is that volunteerism be taught at all levels of education in Jamaica, so that our young people can grow knowing from childhood that they can do something on a voluntary basis, to help this country,” he said.

The professor’s latest gift to the country is a book that he hopes will rekindle the spirit of volunteerism locally. The altruist’s charity, which was founded in the 1980s, has benefited several hospitals and health facilities, such as the National Public Health Laboratories, as well as the St Catherine Municipal Corporation, The Jamaica Cancer Society, RISE Life, and schools. He has also contributed to hurricane-relief efforts and intercultural developments.

“The last big project was the building of a multipurpose kitchen and dining facility at the Women’s Centre (of Jamaica Foundation) at 42 Trafalgar Road,” Morgan said. This was in 2010.

Ill-health has curtailed Morgan’s activities in the last few years, but the 89-year-old philanthropist said he mustered enough energy to put together the book, Volunteering for Jamaica, which highlights some of the missions his organisation has undertaken.

Morgan is blind in one eye and almost blind in the other, and so he depended on his wife and granddaughter to assist him in putting the book together. The additional help was necessary, too, because he has a neurological condition that affects movement.

Morgan has been living in the US since 1961 and was a professor of sociology at Howard University for more than 20 years. He then founded the Social Work Department at the Bowie State University in Maryland and was given special commendation from former governor of Maryland, William Donald. He retired from the university in 2001.

Despite living and earning an income in the United States, Professor Morgan said he will never change his Jamaican citizenship.

“I call myself a commuter because I have been coming to Jamaica regularly,” he said during an interview with The Sunday Gleaner.

In 1979, Morgan constructed a simulation of Jamaica on his front lawn in an upper-middle class neighbourhood in Washington, DC, in a bid to promote the country as a desirable tourist destination.

“It is hard to tell how people will be inspired by a promotional project until after it is implemented,” said Morgan in his book.

“During the past 38 years, thousands of national and international tourists have toured and viewed Jamaica Gateway in Washington, DC, many of whom have expressed interest in visiting Jamaica. Jamaica Gateway is viewed on social networks via the internet by millions of people around the world, reminding them that Jamaica is not only a beautiful destination for their vacations, but a promising place for investment opportunities,” he said.

Morgan is almost obsessive in his patriotism and love for all things Jamaican..

“When we come to Immigration, I go to the national line and I see all these Jamaicans going to the visitors’ line, they are visiting Jamaica; they are not Jamaicans, and I think that is an insult to our country. I don’t blame them. Each to his own, but that doesn’t spell too well for Jamaica,” he said.

“The greatest insult that I’ve ever had from the Government of Jamaica was some time in the 1990s. I got a letter from an official at the embassy telling me that I should become an American citizen in order that I can vote and influence legislation coming to the Caribbean,” he said.

Proceeds from the sale of Morgan’s book will be donated to registered Jamaican charity, Hope Opportunity Charity. The funds will go towards providing skills training for teens.