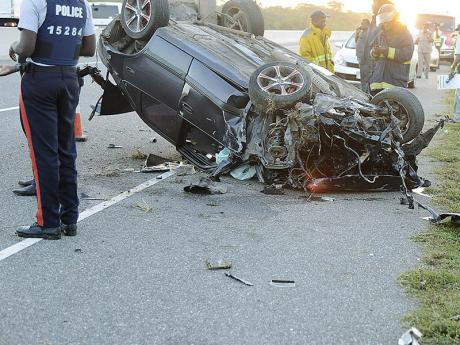 In this file photo, police and fire officials gather on a crash scene

Both the police and the Jamaica Fire Brigade say although emergency responders are trained in basic first-aid treatment, it is not mandatory for them to apply these skills when helping victims in emergencies.

"You cannot force someone to perform CPR because it is more personal as well in regards to checking pulse, in such a case it depends on what the officer in charge of the operation decides," said Public Relations Officer at the Jamaica Fire Brigade Emeleo Ebanks.

He was reacting to a complaint from Kingston woman Kayann Brown after she witnessed a crash on the Sir Florizel Glasspole Boulevard two weeks ago.

Brown said upon arrival at the crash site, police personnel declared that the victim was dead without even checking his pulse.

But Brown said she had earlier witnessed the victim moving his hand.

Brown said even without the gloves, she proceeded to test for the man's pulse and detected that it was weak.

The woman said the police then called the fire department, and after 40 minutes the emergency responders arrived.

However, she said they too refused to check the victim's pulse.

A corporal at the National Police College of Jamaica, who asked not to be named, also said it was not mandatory for police officers to perform first aid treatment on emergency victims.

The corporal said while it is encouraged for officers to go beyond the boundaries to help citizens, no repercussions will be faced if they choose not to perform first aid procedures on victims.

"There are no disciplinary actions if an officer doesn’t check the victims pulse and even though we do first aid training when they just come, some officers may not even remember how to do it," the corporal said.