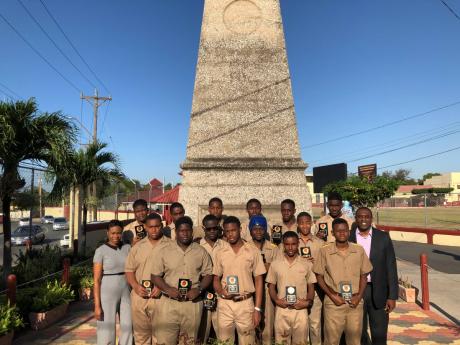 Contributed
Successful Wolmer‘s Boys’ fourth-formers show off awards they received for achieving perfect scores in the Wolmer‘s Go to Work programme. They are accompanied by head of the school‘s English Department, Caprece McCleary (left), and CEO of the Jamaica Mortgage Bank, Courtney Wynter, chief judge of the programme.

If a group of fourth-formers at Wolmer’s Boys’ School in Kingston were to apply for jobs today, they would be that bit more confident that they would blow their interviewers away.

That’s because of an innovative job-preparation and orientation programme dubbed ‘Wolmer’s Go to Work’, which seeks to familiarise the boys with the process of searching and applying for jobs and boost their confidence in transitioning from high school. In fact, the venture has been such a success that it has sparked jealousy among sixth-formers and their parents, who want to share in the benefits. Administrators are so proud of its scope that they want other schools to explore the model.

Wolmer’s Go to Work, which operates in a competition format, pushes the boys to find suitable jobs, prepare résumés and ­applications, and be grilled by interviewers. Out of the pool of fourth-formers who entered in January, 15 outstanding boys were on Monday recognised and awarded during devotion.

“I am now in a great position if I were to really pursue a job,” J’havier Lynch, who applied to become a highway designer, told The Gleaner.

“It was a very interesting ­experience for me. It is very new, and it gave us a real simulation of what it will be like in the working world,” the 15-year-old said. “Our teachers gave us a website to search for jobs on. Wanting to be a civil engineer, I pushed for the position of a highway designer. The process was no hassle for me because we got a lot of help from the teachers.”

His schoolmate, Matthew Campbell, said that before getting into the cut and thrust of the competition, he was not at all familiar with the process of drafting job applications. Now, he’s brimming with confidence.

“I applied for an accounting job at Windrock International Accounting Agency. The experience applying for the job was quite fun, especially learning how to sell myself to the interviewers,” said Campbell, who is also 15. “I constantly had to redo my résumé just to make sure everything was in tip-top shape. The day of the interview was a real experience!”

The implications of social-media posts on job prospects was one of the highlights of the programme for J’havier. That sage advice was also reinforced by his mother.

“One of the things they taught us was to be careful what we post on social media. My mother warned me about that stuff,” he told The Gleaner.

“It can probably be a big factor in what you may or may not be successful in, because you are showing the world a big piece of your personality. If a company chooses to do further research, that is the first place they will look to find more information on you to know your true personality.”

Programme organiser Caprece McCleary said the initiative was taken so seriously that the students even had to submit to psychometric tests.

“We utilised parents, old boys and various working professions [for the judging]. The students had to do a cover letter and résumé. They also had to do psychometric tests, because that is one of the things employers now require,” said McCleary, who is also head of the English Department.

“They had to get recommendations from teachers, and they had to do interviews. We explored career paths, dress, and building reference lists. Sagicor’s talent, acquisition unit, as well as Grace Ann Miller from KPMG, conducted workshops preparing them for interviews,” McCleary added.

“Some of our students lack self-esteem. They don’t know much about themselves and how to perform outside the classroom. Even at the end of the interviews, the panel gave them feedback.”

“In terms of being aware of the demands of the working world, young people can be extremely naïve, so this is extremely valuable. It is something to be done in other schools. Parents have asked us to do it with sixth-formers, so even the parents realise the value. Some of them were really impressive; the interviewers said they could get jobs now,” McCleary outlined.

Chief Executive Officer of the Jamaica Mortgage Bank, Courtney Wynter, who was one of judges, described it as an excellent programme.

“It is imperative that you do research on the company and the management. In the interview, you need to focus on how well you articulate and communicate. Focus on dress code nowadays is less of an issue. Just ensure you are properly groomed,” Wynter said.

“The other thing to impress upon the young men is how they use social media. Ringing in every new year with a bottle of Hennessey on social media says that the person may have an issue.”

J’havier Lynch knows the ­dangers of posting inappropriate material and can share that with his schoolmates.

“As it relates to social media, I post pictures of me doing sports and so on. That is not a problem for me, because my mother warned me about that stuff!”