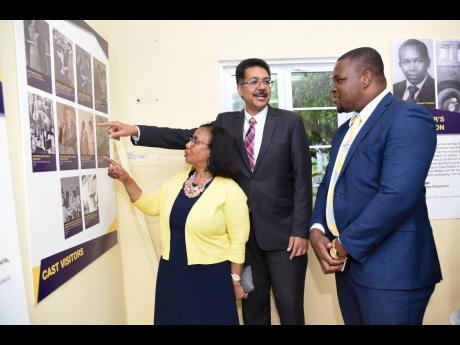 President of the University of Technology (UTech) Professor Stephen Vasciannie (centre) and Campus Registrar Mercedes Deane (left) show senior advisor to the state minister for education, youth and information Howard Chamberlain a photograph at the official opening of the institution’s 60th anniversary exhibition on March 4.

The University of Technology (UTech) Jamaica officially opened its 60th anniversary exhibition on March 4 to highlight aspects of the institution’s history and its contribution to national development.

He said that the exhibition also forms part of the legacy of the institution as a national university and features a number of proud moments and milestones that helped to define UTech as a premier university.

“Staff, students, alumni, and visitors alike will be able to connect with the rich legacy and impact of the institution over the last 60 years,” Vasciannie said at the ceremony.

The exhibition, which opens daily from 10:00 a.m. to 6:00 p.m., has on show memorabilia, publications, trophies, awards, and archived photographs, among other tangible and intangible artefacts.

Curator for the exhibition Dr Winston Campbell said that the exhibition is designed to hint at the university’s excellence and its ability to transform lives, the nation, and the rest of the world.

STAGES OF THE GALLERY

Campbell advised that the exhibition would take the visitor through a number of stages from the days of the College of Arts, Science and Technology to its emergence as a university and its contribution in the areas of science, medicine, and technology.

“We will (also) be showing off our impact in the areas of sports as well as the arts. The exhibition will represent all areas,” he pointed out.

The curator expressed gratitude to those who worked behind the scenes to bring the exhibition to fruition.