5,000 farmers to benefit from climate-smart training 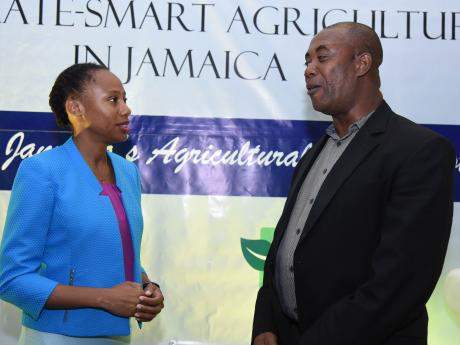 Some 5,000 farmers from St Thomas, St Mary and Portland are to benefit from a €400,000 or J$5.6-million project aimed at increasing their capacity to implement climate-smart agricultural practices.

Dubbed “Accelerating the Uptake of Climate-smart Agriculture in Jamaica” the project is to strengthen the resilience to climate extremes and improve agricultural productivity and incomes of smallholder farmers in Jamaica through the promotion of widespread adoption of climate-smart agriculture practices that are most aligned with national policy priorities.

The project is being funded by the Technical Centre for Agriculture and Rural Cooperation, based in the Netherlands.

Chief Executive Officer of the Rural Agricultural Development Authority Peter Thompson said increased adoption of climate-smart agricultural practices in those parishes is critical and will guide farmers in using best practices for farming.

He was speaking to JIS News during the National Conference on ‘Accelerating the Application of Climate-smart Agriculture Innovations and/or Technologies’ at the Spanish Court Hotel in New Kingston on Monday.

Thompson said while the bulk of the island’s production is from St Elizabeth, Manchester and Trelawny, the targeted parishes have also contributed significantly to the sector.

“When we look at the three regions, St Mary to a lesser extent, we see the state of degradation in those parishes – slash and burn, malpractices on the steep hillsides and continuous bush fires during periods of drought. We need to educate farmers that bush fires should not be used as a means of clearing land for production, because you destroy the biological agents in the soil that help in the building of the soil for it to be more fertile,” he said.

Thompson encouraged farmers to utilise methods such as contour cropping, and barrier farming, which will serve as a protector to soil movement.

He noted that climate change is threatening the food security in the country and so farmers need to be properly educated to address the issues.