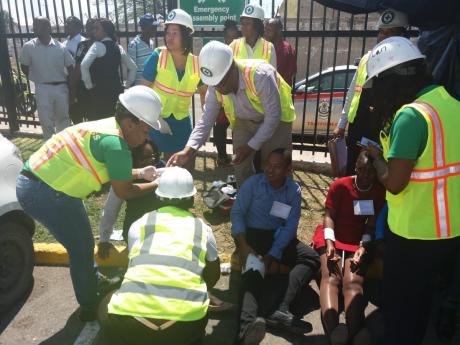 Contributed
Emergency personnel attend to injured&apos; staff at Seprod Limited during an earthquake simulation exercise on Wednesday. The exercise was coordinated by the Kingston and St Andrew Municipal Corporation and also involved the neighbouring West Kingston Power Partners facility​. 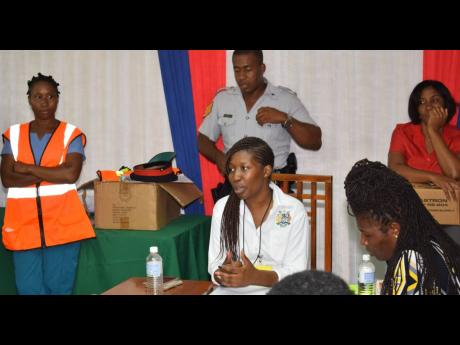 The Kingston and St Andrew Municipal Corporation (KSAMC) is staging a series of earthquake simulations across the municipality aimed at increasing preparedness and emergency response capabilities among various stakeholders.

The first of such exercises was carried out on Wednesday and involved the neighbouring entities of West Kingston Power Partners and Seprod Limited along Marcus Garvey Drive.

“When West Kingston Power Partners approached us for a drill earlier on, we decided it would be best to engage both entities in the activity,” said Terry Forrester, parish disaster coordinator for Kingston and St Andrew.

“We simulated what would happen in the event of an earthquake and the effects thereafter, so a fire was also at the West Kingston Power Partners right after the earthquake,” she noted.

The simulation was carried out by the Emergency Operations, Communications and Public Utilities Subcommittee of the KSAMC’s Parish Disaster Committee in collaboration with the Jamaica Fire Brigade (JFB), Jamaica Constabulary Force (JCF), Kingston and St Andrew Health Department, and the Office of Disaster Preparedness and Emergency Management.

The Jamaica Red Cross and the Earthquake Unit at The University of the West Indies, Mona, also partnered to execute the day’s activities.

Forrester said that other simulations will be carried out throughout Kingston and St Andrew.

The objective is to assess, among other things, the response capability of the KSAMC Parish Disaster Committee; the response plans of Seprod and West Kingston Private Power Partners; the JFB’s capability to react based on the availability of staff and to coordinate with other entities; and the JCF’s traffic management and control system, and first-aid capabilities.

While commending the preparedness of the entities involved, particularly the first responders, Forrester noted that there is always room for improvement.

“We saw the emergency plans, coming out in action, and we saw the use of their safety monitors and safety procedures.

We also saw the response entities, which are the Ministry of Health, the police and the fire brigade, coming out in their numbers to carry out search and rescue efforts,” she said.

She noted that “with every exercise, we know that there are going to be areas of weakness, [which] is what we use to grow and strengthen our response. So we are comfortable with it, but we are not comfortable to the point where we can’t do better”.