Crawford to remain in Portland Eastern 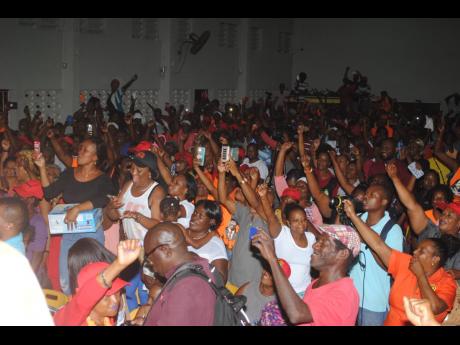 Contributed
A section of the PNP crowd at Port Antonio High School on Wednesday night.

Embattled People’s National Party (PNP) caretaker for Portland Eastern Damion Crawford has dispelled rumours that he is on the move by assuring Comrades that he will remain in the constituency.

Crawford, who was beaten by the Jamaica Labour Party’s (JLP) Ann-Marie Vaz in last week’s by-election, told party workers at a meeting on Wednesday night in Port Antonio that he would not be going anywhere and that he had developed a caring relationship with the people of the constituency.

“Respect. Respect. All my people and all my thugs, all the children and the woman I love,” Crawford sang gleefully.

He added, “I want to say a special goodnight to the leader of the party, Comrade Peter Phillips. I want to add a special thanks to him because in 30 days we tried to visit 127 communities. Without him, many would not have seen us in some of those areas. I am grateful for the effort that he exhibited. I am grateful to the external team, all the people here, councillors and all, who came out and worked for us.

“I am grateful to you the workers who put out your all. Sometimes you have to lose to win. You have to understand this. But there is a question everybody is asking, and I am going to give the answer. When they ask you what I am going to do, Damion Crawford stays.”

According to Crawford, who was cheered by the large gathering at Port Antonio High School, he was staying because “an idea never dies”. Additionally, Crawford said that more than 2,000 people who were part of a motorcade showed that they believed in the message he delivered and that they also believed in the People’s National Party.

Dr Peter Phillips, PNP president, told supporters that despite the loss at the polls, Portland Eastern Comrades are winners who are not defeated or broken-hearted.

“East Portland Comrades make me feel proud to be a Comrade and the leader of the People’s National Party,” said Phillips.

He continued: “What I sense in here tonight (Wednesday) is not anyone defeated. We brought out the largest number of votes that come out for the People’s National Party ever in East Portland. And every one of those votes was an honest vote, a truthful vote, a vote that come without money, a vote that come from the heart.”