Growing list of contenders line up to replace May 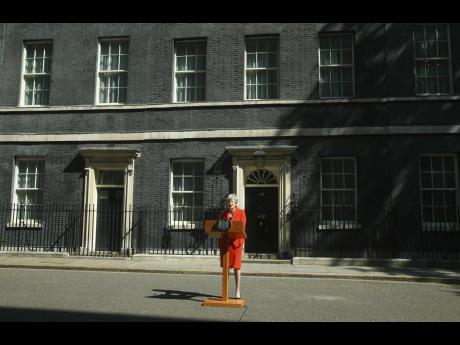 British Prime Minister Theresa May makes a statement outside her 10 Downing Street office yesterday. May announced that she will quit as Conservative Party leader on June 7, triggering a contest for Britain's next prime minister.

The race to succeed British Prime Minister Theresa May has not officially begun, but the field of contenders is quickly growing.

Health Secretary Matt Hancock revealed today that he is seeking to replace May, joining four others who have already announced their candidacy.

May announced yesterday that she plans to step down as leader of the Conservative Party on June 7.

However, she says she will stay on as a caretaker prime minister while the party chooses a new leader in a contest set to start June 14.

May’s successor will have to try and complete Brexit — something she failed to deliver during her three years in office.

While she succeeded in striking a divorce deal with the European Union (EU), the plan was defeated three times in Parliament by lawmakers across the spectrum.

The issue remains in political deadlock.

The best-known candidate for what will be a very difficult task is flamboyant former Foreign Secretary Boris Johnson, who has said he will take Britain out of the EU on October 31 even if no deal has been reached with EU leaders.

Johnson’s willingness to leave without an arrangement in place is already causing some ripples.

Another contender, International Development Secretary Rory Stewart, said Saturday he could not serve in a Cabinet led by Johnson.

Stewart says he could not work for a leader who is comfortable with the idea of a “no deal” Brexit when Britain leaves the EU.

Many economists and business leaders have warned that a “no deal” departure would have a drastic negative impact on Britain’s economy and hurt its European neighbours.

The Conservative Party chooses its leaders in a two-step process.

First comes a series of votes among the party’s legislators to establish two top contenders, then there is a nationwide vote by about 120,000 party members.

The opposition Labour Party has warned of an immediate challenge to the new leader with an eye toward forcing a general election.