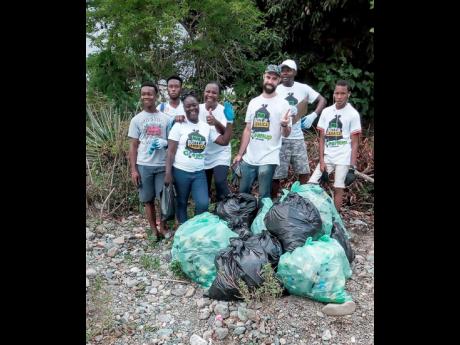 It was Labour Day, and various groups in communities across the island could be seen performing clean-up or rehabilitation activities in their area.

Likewise taking on the demands of the day was the Port Morant Community Development Committee (CDC) in St Thomas, whose focus remained true to the group’s commitment to the beautification of the municipality in which they live, work, worship and go to school.

Speaking with The Gleaner, vice-president of the local CDC, Richard Gowie, explained that though they were aware of the national theme for this year’s Labour Day, ‘Child Safety… It’s You, It’s Me, It’s All A We,’ the group had long planned their project, even before the national announcement.

“The thing is, we would normally participate in the national project, but we weren’t receiving the expected support from the heads. Some time ago, we (Port Morant) were awarded the Best Community Project by the Social Development Committee, and this encouraged us to continue keeping our area clean,” Gowie told The Gleaner.

“So in order to get additional support, we applied to the Jamaica Environmental Trust to get whatever support we could to maintain the status of best-kept community,” he said, adding that they were successful by becoming part of the Nuh Dutty Up Jamaica programme, in which they were charged to participate in two of its projects.

Gowie, who revealed that this marks their second year as part of the programme, named the International Coastal Clean-up initiative in September as one such project and said the Port Morant CDC decided to use Labour Day for the other.

According to him, “We knew that this would be the best, if not the only, day that the committee members and other agencies in the area could offer their support. So our Labour Day project was dedicated to the further beautification of Port Morant.”