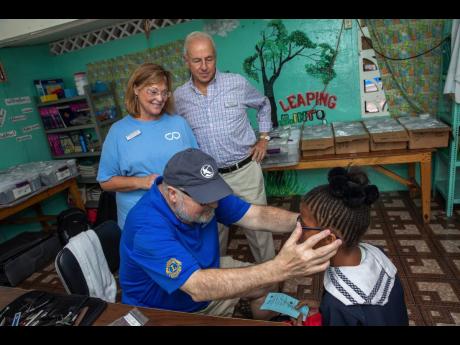 Contributed
Diane Pollard, president and CEO of the Issa Trust Foundation, and Chairman Paul Issa smile as a volunteer fits a pair of glasses on a Savanna-La-Mar Primary School student.

The Issa Trust Foundation, a non-profit organisation, has been making significant contributions to the health and education sectors in Jamaica.

The foundation was established in 2005 by Couples Resort and Spa, which is a part of the House of Issa. “The House of Issa was started by my grandfather, who came to Jamaica in 1893 with his father and once he became successful, because they were poor merchants, my grandfather, Elias Issa, wanted to give back to the country he had adopted as his home,” said Issa, “He started the Issa Foundation and a student has benefited from a full scholarship to university each year since 1938,” said Paul Issa, chairman of the Issa Trust Foundation.

“Everybody can do something to help; no matter how small. There is a lot to be done and we have an obligation to step up and step in,” Issa told The Gleaner.

The Issa Trust Foundation focuses mainly on paediatric healthcare and education. “We focus on helping in areas where we operate our hotels, which include St Mary, St Ann, Westmoreland and Hanover,” Issa explained.

He further said the foundation has refurbished the Paediatric Ward at the St Ann’s Bay Hospital. “We helped to create the special-care nursery called the Neonatal Intensive Care Unit in the St Ann’s Bay Hospital,” Issa said, “We also work with the regional health authority and the Ministry of Health in fixing up hospitals and health centres, all to improve healthcare in Jamaica.”

Issa explained that the foundation is not one that only hands over cheques and disappears; instead, the work is ongoing. He added that when equipment are donated to the facilities, biomedical engineers are brought in to train the health officials on how to use, maintain and repair the machines.

“We don’t just raise money. We raise funds, give expertise, we go in there and we work with them,” he said. “We never totally leave. It is an ongoing work and the relationships are upheld through these,” Issa said, noting that the foundation has been meeting its objectives.

According to Diane Pollard, president and CEO of Issa Trust Foundation, the organisation last year raised over US$9 million in pharmaceuticals, volunteer hours, products, mental health and cancer medications, pointing out that some of these items are difficult to procure.

“The foundation started out small, but through partnerships it has grown to up to US$30 million since its inception,” Pollard stated. “To be able to give back is a dream becoming reality, and we are pleased because the doctors and nurses do an amazing job with what they have, so we are happy to help.”

Issa said the foundation will embark on two projects soon and is currently working on raising funds to get started.

“We will be having a ‘For the Children’ concert, dubbed ‘An Evening with Air Supply and Third World, featuring Koffee’ tomorrow at Couples Resort San Souci in Ocho Rios,” he said. “The proceeds from the event will be going to these two projects which will take place in the Annotto Bay Hospital in St Mary and the Savanna-La-Mar Hospital in Westmoreland.”

Issa attributes the work done by the Issa Trust Foundation to the efforts of volunteers who come from America on medical missions to train hospital staff. He also applauds the staff and administration of the Couples Resort locations for their involvement in the foundation.