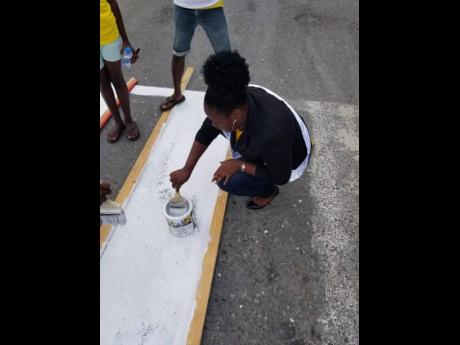 Having the odds stacked against them often causes people to think that they will always fail. However, American-Swiss psychiatrist Elisabeth Kübler-Ross stated, “The most beautiful people I’ve known are those who have known trials, have known struggles, have known loss, and have found their way out of the depths.”

Olecia Robinson, a contestant in the recent Miss Portland Festival Queen 2019 competition, is perhaps an example of the person Kübler-Ross describes.

At age 16, Robinson dropped out of high school with no Caribbean Secondary Education Certificate (CSEC) subjects. She longed to be gainfully occupied but was unable to find support.

“I was a rebellious youth searching for a way out; I wanted to be understood. I wanted an environment where I could be myself and share what I was going through, but none was available,” she stated.

She was not involved in any wholesome or positive activities, and her family grew concerned about the direction her life was taking.

“I got a job at a bar and worked there for three consecutive years, but I had stopped to do the CAP (Career Advancement Programme),” Robinson recalled. “It was not working out because I had no financial assistance, so I went back to the bar.”

At age 20, Robinson was put out of her parents’ home in Portland. She was angry with her mother, but they later reconciled after Robinson fell ill.

“It was a life-and-death situation because I could not walk as there was a blood clot in my leg, so I called my mother. I think everything happened for the greater good,” she said.

Robinson started a journey towards self-improvement about a year ago and has been making strides ever since.

“My journey started when I hit rock bottom in December 2017,” she said. “I was homeless and had nowhere to go. I wanted a family, but I had to do better, so I started applying to places.”

She was then accepted to study the business process outsourcing course at the HEART/Trust NTA before she was given an apprenticeship at Sutherland Global Services.

“This was when things started to turn around for me. My family was proud, and we had a better relationship as a result of that,” Robinson explained.

She was baptised last year and believes that her faith in God helped her to achieve change.

“Though I was mad at first, I believe that being kicked out was meant to happen because that is when I decided to make a drastic change in my life,” she said. “It is through my life that my sister, who works in a bar, is inspired to give her life to the Lord also.”

Robinson has worked in the capacity of national secretary for the Jamaica Baptist Union youth department.

“I have found a purpose in ­serving. I have no regrets as it provides a platform to put yourself out there,” she said.

She also joined youth clubs, which helped to develop her ­public-speaking skills – skills which would assist her as a contestant in the Miss Portland Festival Queen 2019 competition. Although she did not place in the top five, she described the experience as empowering.

“The competition was a life-changing experience. Nothing will ever be the same again,” she said. “I conquered my anxiety, I no longer have stage fright, and I learnt a lot of soft skills that are transferable,” she told The Gleaner.

Robinson has been involved in many areas of community service. She was a volunteer with the National Council on Drug Abuse in Portland, a secretary for the Optimist Club of West Portland, and is a current member of the Community Development Committee in Portland. She also serves other ­community organisations.

“There are many youths, however, who still do not know of the different outreach groups available because the information does not always reach to the rural parts of the country,” Robinson said.

Robinson, who aspires to become a broadcast journalist, has still not attained any CSEC subjects, but she is working to gain the subjects she will need to achieve her dream.

“Be yourself and push beyond the limits that you or others have imposed on you. There will be people who doubt you, but do not listen; use that as motivation as they are the same ones who will be cheering for you when you come out on top,” she advised.