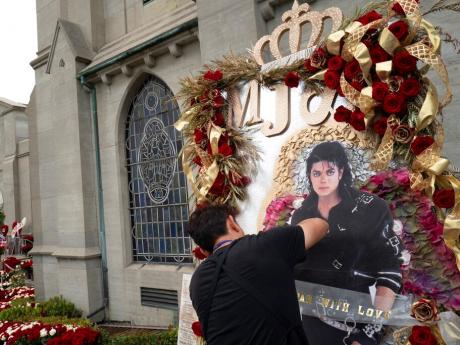 Florist Takeshi Nakamura puts together an arrangement requested by a client from Japan for the 10th anniversary of Michael Jackson's death outside Jackson's mausoleum at Forest Lawn Cemetery In Glendale, California on Tuesday.

Hundreds of Michael Jackson fans bowed their heads in a moment of silence and some shed tears Tuesday outside the Southern California mausoleum that is his final resting place as they marked the exact minute the King of Pop died 10 years ago.

They joined hands in a giant circle for the moment at 2:26 p.m., when Jackson was declared dead on June 25, 2009, then pointed at the sky and yelled "Michael!" in unison.

"There are people dying, if you care enough for the living, make it a better place, for you and me," the crowd sang together in an emotional group rendition of Jackson's anthem "Heal the World."

It was a solemn remembrance in what was largely a lively all-day celebration of Jackson at Forest Lawn Memorial Park in Glendale, where his music blasted and fans of many ages from many countries sang, danced and took selfies.

Here are 10 photos of the pop star to mark the 10th anniversary of his passing:


1. In this March 2, 2005, file photo, pop icon Michael Jackson waves to his supporters as he arrives for his child molestation trial at the Santa Barbara County Superior Court in Santa Maria, California.. Tuesday, June 25, 2019, marks the tenth anniversary of Jackson's death.


5. This November 7, 2001 photo, shows Michael Jackson waving to crowds gathered to see him at his first ever in-store appearance to celebrate his new album 'Invincible' in New York.


6. Signatures on a poster of the late pop icon Michael Jackson at the Charles H. Wright Museum of African American History in Detroit on a photo taken in 2001.


7. Entertainment and corporate lawyer John Branca, the co-executor of Michael Jackson's estate, poses in his office next to an artwork presented to him from Sony Music commemorating the sale of 100 million copies of Michael Jackson's album 'Thriller', at the law firm of Ziffren Brittenham LLP in Los Angeles.


8. This March 5, 2009 photo shows Michael Jackson as he announces ten live concerts at the London O2 Arena in south London.


10. Super fan Yasuyo from Yokahama, Japan holds her Michael Jackson dolls while standing next to a pencil sketch she drew of Michael while paying her respects in front of Jackson's mausoleum for the 10th Anniversary of Jackson's death in front of the singers mausoleum at Forest Lawn Cemetery In Glendale, California on Tuesday.