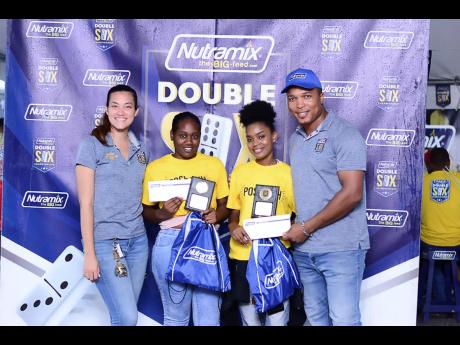 In May, eight teams comprising agriculture students of the Charlemont High school in St Catherine, participated in the Nutramix Double Six Championship. Their objective was to win the main prize of 100 baby chicks and one ton of broiler feed, which the students wanted to contribute to their school’s livestock enterprise.

However, that dream came crashing down when neither team made it to the final.

“The students were very disappointed that neither of the teams advanced to the final. So we went away with nothing but the experience from the competition. We decided to go back to the drawing board and to return with a vengeance,” explained Tanique McKenzie, a teacher at Charlemont High and chaperone for the students who participated in the domino championship.

Last Saturday, the students decided to re-enter the competition in Clarendon. With a gust of showmanship and determination, two of the teams finished in first and second place.

“We wanted to expand our livestock enterprise at the school, so we opted to re-enter. The same intent was true when we entered in Clarendon”, McKenzie explained.

The school has been in dire need to resuscitate its livestock venture.

“We’ve had chickens before, but it’s through that enterprise that we feed our track and field athletes and the football team,” McKenzie added.

With the disappointment at not advancing to the final of the previous domino championship in May, Nutramix decided to come to the school’s assistance by gifting the institution with 200 baby chicks and bags of broiler feed as a start-up quantity. This will be done at the start of the 2019-2020 academic year in September.

Trabrahn Scott, a 19-year-old student at Charlemont High, and Kavaine Watkins comprised the Charlemont Legends team, which finished in first place last weekend. A huge domino fan, Scott who just completed upper-sixth form, said the experience was worth it.

“I play domino a lot when I am home, but the experience of playing with others was a good one, especially when you know you were competing to win something. I feel good about winning, because we never expected to win”, said Scott.

He won 20 bags of broiler feed and 50 baby chicks. He plans to utilise the proceeds from raising and selling the chickens to enhance his education.

“I will be using the proceeds from the chicken to help pay for my college tuition. I want to study for a bachelor of science in marine transportation at the Caribbean Maritime University”, he said.

Charlemont Angels, which comprised sixth-form students Adacia Williams and Chloe Anderson, finished in second place. This is the first time in the history of the Nutramix Double Six tournament, that an all-female team advanced to the final.

“My aunt is a domino player and I just love the sport. When we came second I was excited and proud of myself,” said Williams.

Her family is involved in poultry farming and she intends to use her prizes, 10 bags of broiler feed and 25 baby chicks, to resell and assist with her tuition.