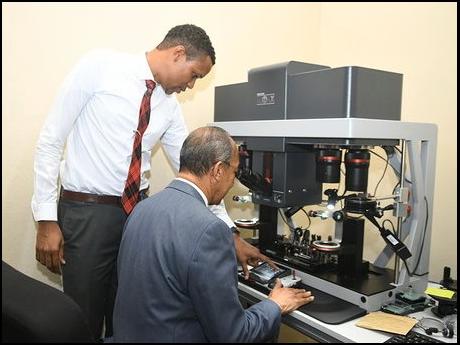 Minister of National Security, Dr Horace Chang (seated), is being taught how a newly-acquired ballistics machine operates at the Institute of Forensic Science and Legal Medicine in St Andrew - Contributed photo.

Minister of National Security, Dr Horace Chang, says the Institute of Forensic Science and Legal Medicine is undergoing major technological and infrastructural upgrades that will expedite the crime-solving process.

Chang says the new building will be fitted with CCTV cameras, air-conditioning units, access control, and a fire suppression system.

The scheduled date of completion is September.

“This modernisation will enable the IFSLM to increase its use of DNA and other biological evidence to solve crimes, by prosecuting offenders and exonerating the innocent,” said Chang.

Jamaica will have its first DNA database, which Dr Judith Mowatt, director of the centre, describes as “a monumental moment”.

The DNA database will not only store DNA profiles, but will also enhance Jamaica’s DNA analysis capability, providing the police with timely results.

Mowatt says the facilities that are now in use are inadequate to support the growing operational and technical needs of forensic science in Jamaica, as existing amenities pose a significant health and security risk for both staff and visitors.

“Public areas of the facility will be clearly defined from secure working areas, in order to meet the requirements related to confidentiality and chain-of-custody for the criminal justice system”, said Mowatt.

An important feature of the DNA database is its ability to assist scientists in determining the identity of serial offenders and re-offenders emerging from correctional facilities.

The DNA database, which is being partly funded by the Government of Jamaica and the Inter-American Development Bank, is valued at US$450,000.

According to Chang, the vision of the centre is to become the leading forensic laboratory in Latin America and the Caribbean.

The DNA database will be complemented by a new, state-of-the art autopsy suite built to international standards, to foster an increase in the number of post mortems that can be performed, creating a reduction in the waiting time for autopsy reports.