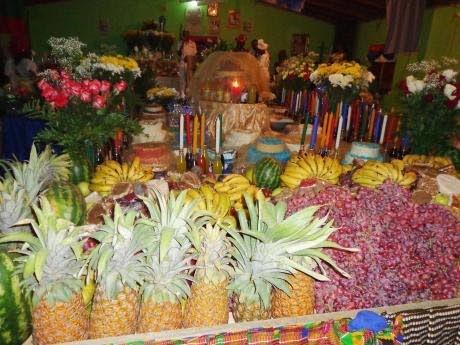 Paul H. Williams
The purpose of the Revival table is to communicate with and have communion with the ancestors.

Revivalism emerged from the Great Revival of 1860-61, which began from 1858-59 as a great Christian revival, known as The Prayer Meeting Revival. It swept across continental USA, and the British Isles.

Tony Cauchi, writing online, says, “The results of this revival were filled churches, transformed lives, missionary expansion, evangelistic passion, philanthropic growth and a massive revitalisation of the universal church. It was extraordinary, even in Jamaica!” The fervour spread, and took root in 1860-61 in Jamaica.

Yet, Revivalism didn’t emerge as one cohesive force. There are two branches – the 60 Order or Revival Zion, and the 61 Order or Pocomania. Zion tends to have many elements of orthodox European religions, while Pocomania represents mainly elements of African spiritual worship and practices.

Revivalists believe the spiritual and the earthly realms are one. The living and the departed, therefore, can communicate with each other. “Therefore, the living can become possessed and influenced by the spirits of the dead,” Olive Senior writes in Encyclopedia of Jamaican Heritage.

They also subscribe to the holy trinity concept of The Father, Son, and The Holy Ghost, known as the ‘messenger’ or the ‘spirit’, who possesses worshippers and converts. The spirit might be that of Old Testament prophets, New Testament apostles and evangelists, archangels, Satan, his assistants, other beings and mystical figures, and the spirits of influential dead Revivalists.

And inasmuch the same way Revivalists believe the spiritual and earthly realms are one and the same, in that they can move from one to the other through possession, they don’t see a separation between good and evil forces. One force has evil and benevolent qualities, which are called upon to do different things.

“Revivalists are concerned with harnessing the unseen forces of the universe that are not good or bad in themselves, but can be utilised by man for different purposes,” Olive Senior writes in Encyclopedia of Jamaican Heritage. And sometimes Revivalists are possessed by invisible forces.

Possession is the vehicle that transports Revivalists from one realm to the other. To get into the spirit or be possessed happens after much singing, dancing, clapping, drumming, trumping and praying. The worshipper who is possessed is said to be travelling. Dreams and visions are also portals that connect the realms of the living and that of the departed.

Because of the spiritual nature of Revivalism, Revival people use many artefactual symbols to represent elements of the religion. From their attention-grabbing attires, adorned with sundry paraphernalia, to the objects they use in their services and rituals, Revivalism is replete with symbolisms.

One of the symbols of Revival is the turban, wrapped, styled and embellished in a variety of ways. It is one of the most recognisable symbols of Revivalism, and has given use to the term ‘wrap-head church’. The wrapping of the head and how it is wrapped has many symbolic reasons, likewise the things that the turban is adorned with. The colours and styles of the turbans are based on how the wearers are instructed by angels and the angels that they are working with.

In an interview with Revivalism scholar/researcher at The University of the West Indies, Mona, Professor Clinton Hutton, he said the influence of the turban is to attract a particular type of spirit. In this case, Hutton said the turban is like an altar, a seal, as it is adorned with objects to induce spiritual possession. In this case, the spirit takes over the head of the wearer until the possession is over.

“The seal, a consecrated space, is where Revivalists do their cleansing (cutting and clearing) and invoking of spirits. These seals, or sacred ports, or docks, or spirit-empowered devices, are an assemblage of a multiplicity of natural and/or manufactured ritualised objects abounding with movement (aliveness) from the interplay of shapes, colours, light, shade and texture,” Clinton Hutton writes in Jamaica Journal Vol. 32 Nos 1-2.

The name of Hutton’s article in the said journal is ‘The Revival Table – Feasting with the ancestors and spirits’. In it Hutton writes about the symbolism of the Revival table, another important Revival symbol. It is an elaborately set table of cooked and baked food, fruits, citrus, liqueur, candles and other objects. It is to communicate with and have communion with the ancestors.

No other religion or movement in Jamaica has influenced popular culture and the arts more than Revivalism, the dramatic ritual that it can be. “Revival music, dress, and behaviour have inspired novels, poems, plays, dance theatre and reggae music … ,” Olive Senior writes in Encyclopedia of Jamaica Heritage.

And the late former prime minister, Edward Seaga, was one of many people who found Revivalism fascinating and was gripped by its magnetism, ethos and nuances, which he studied and immersed himself into.