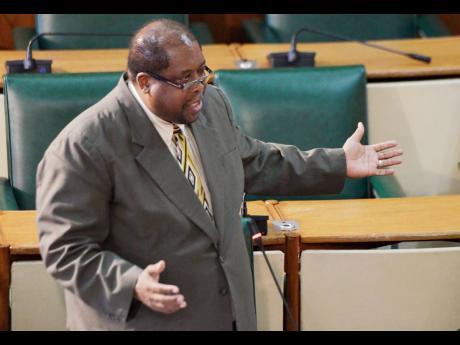 This week’s Legal Scoop constitutes a column submitted by Ruel Gibson, attorney-at-law, on the recent pronouncements by Senator Lambert Brown on certain sections of the Trust Bill. The column is set out verbatim below.

Recently, quite a stir was caused in the House of Parliament when the inimitable Senator Lambert Brown raised concerns about certain sections of the bill titled, ‘The Trust Act (the Act)’. The section of the act that Senator Brown took issue with is to be found in Part I, “the Interpretation Section,” which defines “personal relationships” to include:

(a) Every form of relationship by blood, adoption, marriage or cohabitation, regardless of whether the law of any jurisdiction recognises the validity, legitimacy or existence of the relationship.

(b) A former personal relationship which has terminated in law or in fact.

When any definition is given in an act of Parliament, it is there for a purpose. It is there because the term defined will be used in subsequent section(s) of the legislation. As such, the phrase “personal relationship” later appears in Section 6, subsection 4 in the following context:

“(4) No Jamaican trust and no disposition of property to or upon such trust, is void, voidable, liable to be set aside, invalid or subject to any implied condition, nor is the capacity of any trust official or third party to be subject to any obligation or liability or deprived of any right, claim or interest by reason that:

(b) The trust or disposition –

(A) By reason of a personal relationship to a settler or beneficiary.

(ii) Contravenes or potentially contravenes any rule of law, judgment, order or actions of any other jurisdiction intended to recognise, protect, enforce or give effect to any such rights, claims, interest, obligations or liabilities.

In plain language, what Section 6, subsection 4 is saying is that no Jamaican trust, etc, is to be deemed invalid on the basis that the trust in question:

(a) Affects persons from another country which may not recognise the concept of a trust or;

(b) Does not recognise the rights, claims, or interests of persons who may have a personal relationship – as defined – to the settler. For instance, if a settlor’s gay son legally married another man in South Africa or Canada and adopted some children, and said settlor decided to leave property to his grandchildren from heterosexual unions but not to his grandchildren from the homosexual union, the children of the homosexual union, by virtue of Section 6, subsection 4, could not successfully challenge their exclusion from the definition of “grandchildren” by pointing to the legitimacy of their parents union in Canada or South Africa. Similarly, if the fictional settlor decided to avoid any rights the male spouse of his son felt he should have been entitled to by the fact of their marriage, this section enables the settlor to legally make such avoidance.

Contrary to what Senator Brown thinks, therefore, the Trust Act, as worded, does not weaken, but rather strengthens, Jamaica’s Parliament’s current stand against acknowledging or legitimising gay marriages or unions. It is not my aim to take a stand on whether Jamaica should or should not allow gay marriages; my aim is simply to point out what the act is actually saying.

OTHER SECTIONS WHICH SUPPORT SECTION 6, SUBSECTION 4

For the avoidance of doubt, Section 5, subsection 2 of the act also makes it clear that, “a trust is invalid and unenforceable in Jamaica to the extent that:

(a) It purports to do anything contrary to the laws of Jamaica.

(b) It confers or imposes any right or function the exercise or discharge of which would be contrary to the laws of Jamaica.

(d) The court declares that –

(iii) it is immoral or contrary to public policy”.

It is clear, therefore, that both in the wording of Section 6, and elsewhere in the act, the drafters of this legislation were at pains to ensure that no Jamaican trust could be defeated because it did not recognise personal relationships which may be legal elsewhere.

At the time of writing, it was brought to my attention that an amendment was made to the bill to insert after the word “cohabitation” in the definition of personal relationships “to the extent that such relationships are recognised by the laws of Jamaica”. I will humbly suggest that this amendment was totally unnecessary and only serve to complicate the law. It will definitely lead to interpretation issues.