US Supreme Court clears the way for Trump's border wall 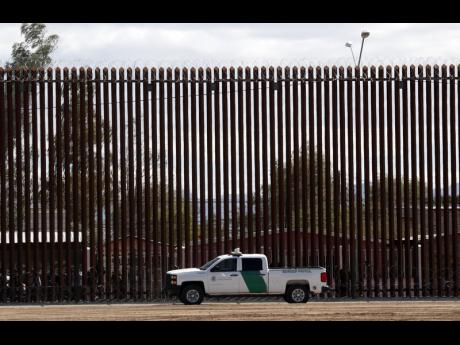 In this April 5, 2019, file photo, a US Customs and Border Protection vehicle sits near the wall as President Donald Trump visits a new section of the border wall with Mexico in El Centro, California. (AP Photo/Jacquelyn Martin, File)

TASHINGTON (AP) — The Supreme Court has cleared the way for the Trump administration to tap billions of dollars in Pentagon funds to build sections of his long-promised border wall with Mexico.

The court’s five conservative judges gave the administration the green light yesterday to begin work on four contracts that were awarded using money from the Department of Defense.

Funding for the projects had been frozen by lower courts while a lawsuit over the money proceeded before the Supreme Court.

The decision to lift the freeze allows President Donald Trump to make progress on a major 2016 campaign promise heading into his campaign for a second term.

“Wow! BIG VICTORY”, Trump tweeted after the ruling was announced.

The Supreme Court’s ruling reverses the decision of a trial court, which initially froze the funds in May, and an appeals court, which kept that freeze in place earlier this month.

The freeze prevented the government from tapping approximately $2.5 billion in Defense Department money to replace existing sections of barrier in Arizona, California and New Mexico with more robust fencing.

The amount was far less than the $5.7 billion he was seeking.

Trump then declared a national emergency to take cash from other government accounts to use to construct sections of wall.