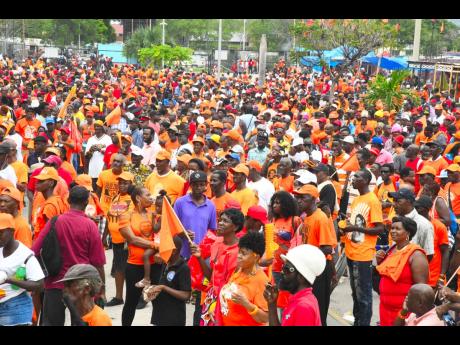 Norman Grindley
PNP supporters outside the National Arena as they make their way inside for the party’s 80th anniversary national conference last September.

In light of the pending leadership challenge to Dr Peter Phillips by Peter Bunting, the Legal Scoop has decided this week to share with readers what they can expect in the lead-up to, and at the annual conference itself, according to the People’s National Party (PNP) Constitution.

While by-laws may exist, the chief authority on the legitimacy of the operations of an organisation will always be its Constitution or Articles of Incorporation. All else is subordinate.

Today’s Legal Scoop has relied on the 2008 amended version of the PNP Constitution, published on its website, for source documentation.

Section 161 of the PNP’s Constitution (the Constitution) is where the supremacy of the annual conference and when it is to be held are to be found. According to the section, “The supreme Authority of the Party shall be the Annual Party Conference, which shall be held in the month of September at such time and place as the National Executive Council may decide.”

We know by now that the period selected for the PNP’s annual conference this year, interestingly, has been truncated to have the leadership issue settled at the earliest point in September, this, after Bunting refused to contest the presidential election earlier in the year through the vehicle of a “Special Conference”. As such, the presidential election will take place at the Annual Party Conference, as customary, with September 7 being slated for the election of president and vice-presidents and September 21 and September 22 for the private and public sessions, respectively. The Legal Scoop is not aware that the venue has been publicly declared as yet but expects that it soon will be.

THE BUSINESS OF THE ANNUAL CONFERENCE

Section 162 of the constitution is where authority for election of the president at the annual conference (the Conference) is to be found. The section lists the election of the party president and four vice-presidents among the various business matters that the Conference shall transact. In the view of the Legal Scoop, “shall”, used in this context is akin to the word “must”.

The Annual Conference shall transact the following business:

(a) elect the President and the four (4) Vice-Presidents;

(b) receive and deal with the annual report of the Party;

(c) receive and deal with the financial statement of the Party;

(e) receive and deal with the annual report of the Parliamentary Group;

(f) receive and deal with such amendments to the Constitution of the Party as may be proposed;

(g) receive and deal with resolutions;

(h) discuss and deal with issues of Organisation;

(i) such other business as the National Executive Council may approve.

ENTITLEMENT TO ATTEND AS DELEGATES

Section 163 of the constitution identifies certain categories of persons who are “entitled” to attend the Conference as “delegates”. The section provides:

“All members of the National Executive Council and Party Members of Municipal and Parish Councils shall be entitled to attend as delegates.”

In addition to this section, there are various other sections to be found throughout the Constitution, which empower various other groupings to appoint delegates to the Conference. These groupings include direct members ( section 25); groups ( section 81 and Standing Order 8 of Annex 1); divisional organisations ( section 102), among others.

CUT-OFF DATE FOR SUBMISSION OF DELEGATES

In the absence of other rules or by-laws impacting this provision, we can conclude that the delegates from these groups will be settled no later than August 26, 2019, (that is, 10 days before the first session of the Conference on September 5).

PROCEEDINGS AT THE CONFERENCE

Annex #2 to the constitution also governs proceedings at the annual conference.

- The chairman officiates the Conference.

- The Conference shall not consider any business that does not arise out of a resolution on the Agenda.

- Every delegate present at the Annual Party Conference shall be entitled to vote. The chairman shall, in addition to his original vote, be entitled to a casting vote.

- Members are allowed to speak for no more than five minutes unless they receive the consent of the chairman.

- Members can only speak on resolutions or amendments and cannot speak more than once on a subject unless they are the movers of an original motion, in which case, they would have a right of reply.

- Once a subject has been discussed and voted on, it shall not again be introduced during the Conference except with the consent of a majority of the Conference.

- The ruling of the chairman on all matters shall be strictly obeyed.

- Each delegate is to receive an agenda, which is to be strictly adhered to unless a motion to suspend the Standing Orders is made and carried by the majority of those present.

Here’s to an orderly and properly run leadership challenge. May the people of Jamaica emerge the winners when the dust is settled!