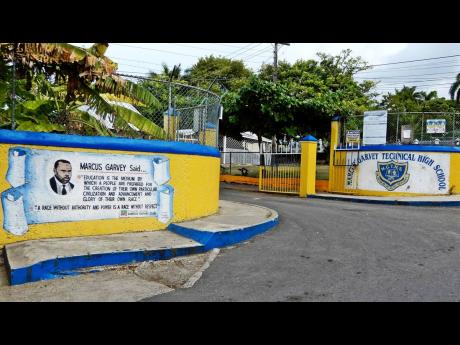 After a year in the post, principal of Marcus Garvey Technical High School (MGTHS) in St Ann’s Bay, Anniona Jones, has declared a new day at the institution and has set about making the school more reflective of the national hero in whose honour it is named.

In an interview with The Gleaner, Jones said her job is to continue rebranding the institution, as the educational focus will expand to include entrepreneurship and skills training in a bigger way.

Marcus Garvey Technical High School has an interesting history, especially over the last decade or so.

It is a school that receives students who are performing below average and residents in the community have viewed it as a troubled institution, where indiscipline prevails and examination passes fall below expectations.

It was this reputation, in 2011, that led then Education Minister Andrew Holness to name the school among four that were targeted for intervention by the Ministry of Education.

“It is a new day and that’s one of the reasons, too, we have kept our mantra, ‘One God, One Aim, One Destiny – Excellence’,” Jones declared.

“My job is to continue the work that was started to rebrand this institution that bears the name of the Right Excellent Marcus Mosiah Garvey, one of the greatest philosophers of the 20th century. We honestly believe that a part of our school is to focus on not just skills development as a technical high school, but also black wealth, generating wealth. So entrepreneurship as well as skills training is going to be even bigger than what it is right now.”

Jones continued: “So we have two associate degree programmes that we started, along with the University of the Commonwealth Caribbean. We also have the Centre of Occupational Studies that is partnering along with us for that programme.

“We’re starting a sixth form in September, but we don’t want to be a traditional grammar-school sixth form. We really want to have a technical sixth form that really prepares children to go into occupational degrees for skills development and entrepreneurship training, in addition to changing mindset.”

Going forward, Jones believes the school can improve its image and achieve much as an educational facility, even as it continues to get below-average students.

“We believe that as a technical institution it doesn’t matter from where kids come in; we’re not complaining, we’re not arguing. We know we have children that come in, on average, reading at about grade four, with a math age of about grade three and we’re not arguing about it. All we’re saying is, we plan to take these children towards their purpose using skills development and shifting mindset. We know we’re starting with a handicap, but once we understand where we’re coming from and we firmly set our eyes on where our kids can go, the staff that I have are qualified and trained, and they can get the kids there.”

Jones said the school’s Mansfield campus, which accommodates new students, will be used as an incubator to address students’ deficits and get them ready for high school academically and, more importantly, shift their mindset to more positive thinking.

“So we’re not going to quit on them, once they don’t quit on us,” the principal asserted.

Over 1,600 students are on roll at Marcus Garvey Technical.