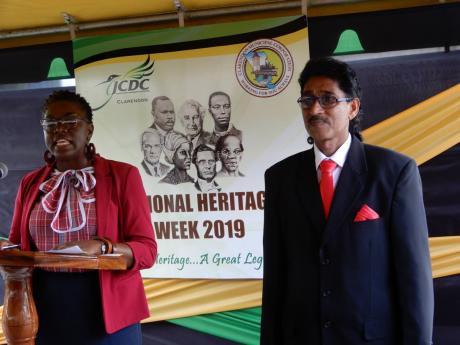 Leroy Jagasar is filled with one passion and that is keeping the culture of Hosay – a Muslim Indo-Caribbean commemoration – alive and flourishing in Jamaica.

Acknowledging that there is still much to be done where the impartation of the knowledge is concerned, he continues to push in his corner of the world in south Clarendon.

Jagasar, who was awarded for Excellence in cultural integration on Monday at the 2019 staging of the annual Heroes’ Day Salute, Parade and Awards Ceremony held on the grounds of the Clarendon Parish Courtyard, said he was hooked by his late father as he started off assisting him with the decorations for Tazias.

When his father died, he said he was left stranded as although he knew how to, do the decorations, his knowledge did not extend to building the frame.

Thankfully, he had a family friend to reach out to and for five months, they toiled – in time to make the two-day August celebration.

Hosay is a festival of celebration of two Muslim brothers –Husain and Hasain and it’s a commemoration of their deaths.

“The celebration of the death culture has been going on in Jamaica from the late 1800s,” Jagasar shared.

He said that today, the culture is thriving and it is not just embraced by Indians. In fact, he said, 90 per cent of those involved in the programme are blacks.

Jagasar told The Gleaner that this year’s celebration was “unbelievable” and that he was looking forward to sharing the culture in more schools in the parish.

Commenting on his award on Monday, he said he is thrilled at being recognised.

“It’s great, I feel blessed and I will continue,” he said.

Born in Cornpiece, Vere, Jagasar moved to Race course, where he now resides. A past student of Glenmuir High School, he has been involved in the making of Tazias, for the Hosay Festival since 1983.

The festival is now held in August in Race Course. The Hussay Festival was brought by East Indians who came to Jamaica as indentured servants after the abolition of slavery.

Jagasar has built Tazias for the Ward Theatre, the Jamaica Cultural Development Commission National Grand Gala, and the Institute of Jamaica. He also leads a group of performers that practices traditional Indian performances.

Keeping the Hosay culture alive is very expensive and that doesn’t attract much sponsorship support, Jagasar said. His dream is to see the tradition being embraced in a classroom setting as many persons are not aware of this rich part of Jamaica’s heritage.

“It is one of our longest-going heritage in Jamaica. For those who want to know more, they are free to reach out to me,” he said.