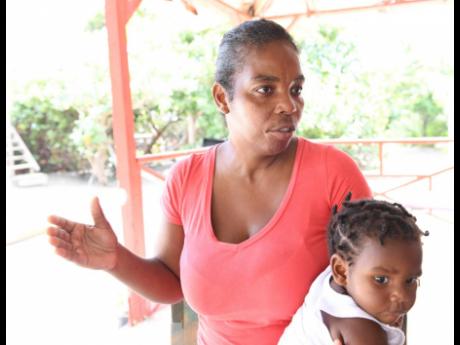 Ricardo Makyn
Ann-Marie Chamberlain, with her son Neville Weir, talks with The Gleaner about the challenges ahead for Beach View Restaurant and Bar.

They waited nervously for two hours fearing the bulldozer that was slated to arrive at noon to begin demolition of the Beach View Restaurant and Bar owned and operated by community nurse and businesswoman Tashnee Tomlinson.

A notice affixed to a tree and dated January 23, 2019, addressed to ‘Illegal Occupant’, had warned that Tomlinson was required to “cease occupation, vacate and deliver up possession of, and remove any fencing and/or temporary structures erected. “

The notice, served in the name of the commissioner of lands, would purportedly take effect on or before April 23, 2019. That date has long passed.

Yesterday morning, Tomlinson, 38, was distraught and desperate reaching out to The Gleaner in a desperate bid for help in bringing her problem to public notice. She had received a text message only that morning that the bulldozer was slated to arrive at noon.

A group of friends, some in a similar predicament, stood with her in solidarity, afraid but united in desperation. Among them was Andrea ‘Wingy’ Goldson, who explained that she, too, had built on land from which she was being evicted.

“I’m living there with my boyfriend and son for five years, living comfortable, and then these people come and say we have to move,” she told The Gleaner.

“A couple of us go to (the National) Land Agency, but they say they don’t know about it, but the letter come from Land Agency, so I don’t know wah really a gwaan. It mek me stress out knowing that I did homeless before and I going back to the same condition. At one time, I get slim, a only now me a put on little weight.”

Tomlinson, who was born in Port Royal, was cited in 2014 by the commissioner of lands to formalise her occupancy of the property.

That declaration prompted Tomlinson’s attorney-at-law, Bert Samuels, to pen a letter to the commissioner of lands dated October 17, 2019, arguing that that admission was “in conflict with your letter of the 2nd June, 2014. We are, therefore, unable to accede to your notice ... .

The letter continued: “ As an occupant of the land for more than 30 years, we are of the view that should these lands be that of the Government of Jamaica, our client should be negotiated with to settle on the lands.”

Even though she was told that this meant that the eviction notice could not be legally effected without due process, Tomlinson remains restless and watchful should the rumble of a bulldozer target her restaurant.