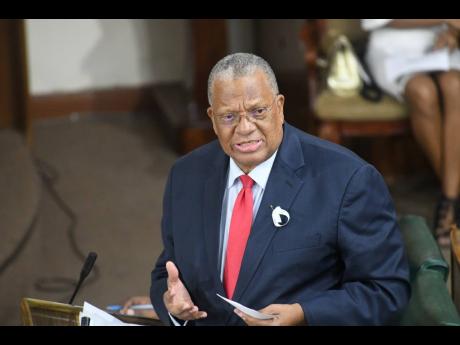 With the expansive roadwork project from Harbour View to Yallahs about to begin, Opposition Leader Dr Peter Phillips has described as short-sighted the plans of the Government to carry out the revised proposal of the Southern Coastal Highway Improvement Project (SCHIP).

The project, for which ground was broken in November, has seen a cut in more than a third of the approved budget since its inception in 2018. The initially planned four-lane highway that would run through to Port Antonio, Portland, has been shelved, reducing the scope of work to the rehabilitation of the existing main road.

The project will cost US$384million.

The adjustment has caused Phillips to foresee a traffic nightmare in the future for the parish.

“We have had a long-time concern about the scaling down of the original proposed road, because we think it is very short-sighted to plan only for the traffic loads of the present. We think that if you’re really going to unlock the full potential of St Thomas, we should be recognising that there is going to be a much heavier traffic load, and that that should be provided for from the outset,” he said.

The People’s National Party president, who conducted a whistle-stop tour of communities in Western St Thomas last Friday, said that the roadway, as originally conceived, would have been vital for the expansion of tourism and agricultural potential, especially coming on the heels of the recent shuttering of two factories in the area.

The Golden Grove Sugar Factory and the Fred. M. Jones Estate have both been closed because of flagging revenues.

“I think that the whole issue of agriculture, industrial development, manufacturing, agro-processing … all of that depends on good, speedy communication between St Thomas and the capital city, where a lot of the consumer base of the country resides between Kingston, St Andrew and St Catherine, and the absence of that has hurt St Thomas,” he said.

Phillips also shared that more dialogue needed to be had with residents who would be affected by the upcoming project to prevent a repeat of the hiccups faced during the Hagley Park and Constant Spring roadworks.

Despite strong criticism from the Opposition, Prime Minister Andrew Holness has rationalised the highway revision, arguing that the land acquisition and engineering works would have been at exorbitant cost.

“Though we are visionaries, we must be practical and scale our developments to make them sustainable,” Holness said during his address at the groundbreaking ceremony of SCHIP in Yallahs on November 16.

“What we have done is to make sure that it is sustainable, so that the people of Eastern St Thomas can have the road to travel on and not just a road that will travel through your parish,” he added.

The multibillion-dollar project will be executed by China Harbour Engineering Company and will include the rehabilitation of approximately 110 kilometres of roadway between Harbour View, St Andrew, and Port Antonio, Portland, and the 26-kilometre thoroughfare from Morant Bay to Cedar Valley in St Thomas.

It will also include construction of the May Pen to Williamsfield segment of Highway 2000.