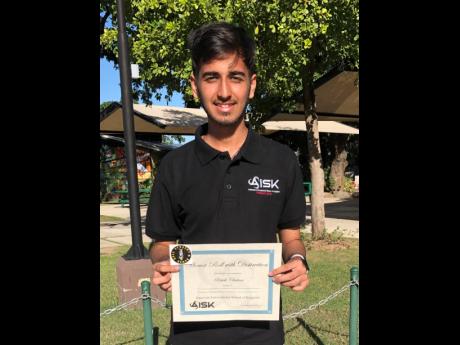 Contributed
Ritvik Chatani shows off one of his certificates.

Eighteen-year-old Ritvik Chatani has once again excelled academically, this time accepted to Wharton Business School at the University of Pennsylvania, a private Ivy League institution in the Philadelphia, United States of America.

On Monday night Ritvik and his parents, Sanju and Sharin Chatani of Ocho Rios, received the good news from the university as they announced their early decision regarding acceptance. They were delighted.

“I am so excited and beyond grateful for this new chapter in my life,” Ritvik told The Gleaner. “I am humbled by the unflagging support of my family, teachers, counsellors, friends and the well-wishing community of Ocho Rios, who have all my backbone.”

Wharton’s alumni include Elon Musk, Warren Buffett, and the CEOs of several top companies such as Google, LinkedIn, CBS, General Electric, Boeing, Pfizer, UPS, Pepsi, among others. Ritvik is hoping to join that illustrious group.

“With God’s blessing, I hope to come out of these next four years a better person,” said Ritvik.

A proud dad, Sanju, told The Gleaner: “With God’s grace and blessing, as well as his hard work and focus, Ritvik has got into the university of his choice. We are proud of his accomplishments, but we are prouder still of his character. We wish to extend our heartfelt gratitude to all his teachers who have supported him in his journey.”

Ritvik’s brilliance was recognised from his prep school days at United Learning Centre in Upton, St Ann, from where he gained a Jamaica National Scholarship to attend Campion.

He, however, opted to attend the Heinz Simonitsch School in Rose Hall, St James. From there, he emerged as the top-performing student in the Caribbean in Caribbean Secondary Education Certificate human and social biology and information technology in 2018.

After Simonitsch, Ritvik decided to skip the Caribbean Advanced Proficiency Examinations and went instead to American International School of Kingston (AISK) and enrolled in the International Baccalaureate Program.

Ritvik, who speaks three languages including Spanish and Indonesian, has had an educational journey that has been coloured with several achievements and awards over the years, including several for ‘Most Outstanding Student.’

At AISK where he was an honour roll student, he was also president of the student council, the environmental club and mentor of the public speaking club.

His studies at Wharton begin in 2020.