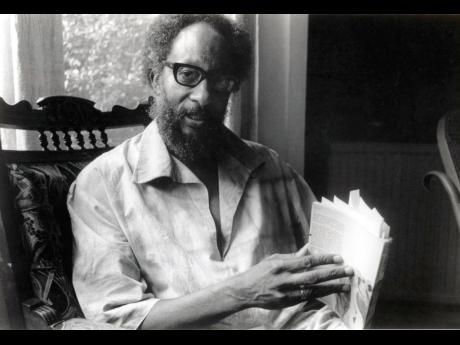 Known for coining the term ‘national language’, late Barbadian poet and historian Kamau Brathwaite will be remembered for his creative style and probing inquiry of slavery, neocolonialism, and migration.

Brathwaite, best known for his Arrivants: A New World Trilogy of 1973, passed away on Tuesday, ending a career that spanned five decades. He was 89.

Fellow poet Dr Velma Pollard has lauded Brathwaite for taking a novel approach to poetry, incorporating music and performance as a defining mark of distinction.

“The whole volume of his production, the poetry, of course, he’s a historian as well. But his poetry was remarkable. He was a towering talent ... . Thing is that he did a lot of innovative stuff, a lot of new things that other people hadn’t thought of doing in terms of poetry. And a lot of his poetry is concerned with Africa and the Caribbean and the relationship of one to the other,” Pollard said yesterday in an interview with The Gleaner.

She later added, “There is a whole generation of younger poets who have been influenced by him.”

Brathwaite, whose given name is Lawson Edward Brathwaite, published several works, including Rights of Passage (1967), Masks (1968) and Islands (1969). His opus X/Self is legendary for its examination of identity.

Pollard said that she was already familiar with Brathwaite’s poetry before they eventually met at the first staging of the Caribbean Festival of the Arts in 1972.

“Before I met him, I met his poetry on records. ... I knew his sister all these years and had stayed in his house in Barbados long before I met him. So I had met his family and his poetry,” Pollard said.

Explaining that she lived close to Brathwaite while he lived in Jamaica, Pollard said she would at times see him engaged in his craft.

“He was hard-working. He was always writing and talking about music. He was into music and his poetry is very musical, so he would always be playing jazz music while he was working on his stuff,

“His back door would be open and you could see him working on the verandah and listening to music.”