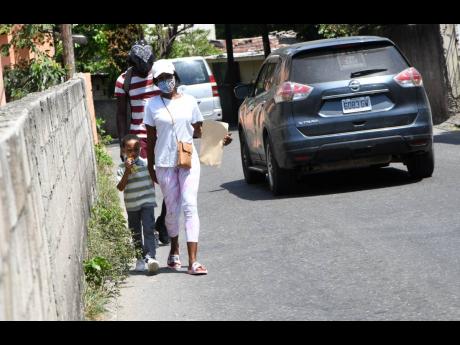 Rudolph Brown/Photographer
Pedestrians walk close to a boundary wall along the Cassava Piece Road in St Andrew. The corridor has virtually no sidewalks.

RESIDENTS OF Cassava Piece in St Andrew are calling for the authorities to address the pedestrian dangers that lurk along the community’s main roadway, which has led to a fatality in the past and caused a scare as recently as last week.

The narrow road has no sidewalks and is a traffic hazard for pedestrians as they jostle for space with motor vehicles. It presents grave perils for vulnerable road users, especially the very young and the elderly.

“It is bad with the children them going to school, because they have to walk in the road and sometimes the cars moving so fast. Sometimes they don’t see the car and the bike, so we would really like to see something done to the road,” he said.

Robinson, who has been living in the community since 1951, said that the thoroughfare has emerged as a heavily trafficked corridor over time.

“It wasn’t like this before. ... No traffic used to run through here so years ago, but since them develop Cassava Piece Road now, the traffic is very bad through here,” said Robinson, who suggested that fences be moved inwards to allow for sidewalks to be built.

Residents told our news team that a tractor damaged a boundary wall last week trying to navigate the roadway. Large trucks and other heavy machinery were years ago banned from traversing Cassava Piece Road, but that law is often observed in the breach.

Robinson remembers a traffic fatality that happened years ago.

“It look like the man didn’t have any mirror and never saw the guy, and him stand up against the wall down there and the truck rub him against the wall and kill him,” Robinson said, failing to recall the year of the tragedy.

The road snakes from Mannings Hill Road to Constant Spring Road, offering a quick bypass to Manor Park and into the upscale communities of northeast St Andrew. A police station and primary and junior high school are located on the corridor.

Besides the relocation of fencing, there have been proposals for the road to allow only for one-way traffic.

“We would really like fi see the road set up and the youth dem have a nice smooth road, ‘cause a morning time when the youth dem a go school, a problem. ... A sidewalk would be good for our residents and other pedestrians,” a resident said.

When contacted, Stephen Shaw, communications manager at the National Works Agency, said that he was in a meeting.

Up to press time, there was no response to questions sent via email.