US group disappointed in Mottley's position on Guyana elections 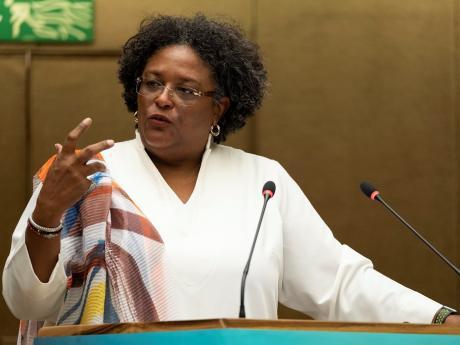 Prime Minister of Barbados and Chair of CARICOM, Mia Mottley.

(CMC): A group based in the United States has expressed disappointment with what it says is Barbados Prime Minister Mia Mottley’s “misguided” position on Guyana’s March 2 elections impasse.

“Without seizing herself of the full set of facts, Prime Minister Mottley, in her capacity as CARICOM (Caribbean Community), chairman, jumped into Guyana’s elections politics, like a bull in a China shop, to support her friend Bharrat Jagdeo, leader of the opposition People’s Progressive Party (PPP),” claimed Rickford Burke, president of the Brooklyn, New York-based Caribbean Guyana Institute for Democracy (CGID), in an open letter to Mottley and the citizens of CARICOM.

“His elections results report shows that Guyana’s ruling APNU+AFC coalition won the elections,” he said. “Like Jagdeo, Ms Mottley delivered remarks, penned in Georgetown and riddled with misinformation, which purported that the PPP won the elections."

“She recklessly called on the Guyana Elections Commission to declare the PPP the winner, although the Caribbean Court of Justice (CCJ) had already issued a restraining order against the Guyana Elections Commission (GECOM) prohibiting it from declaring the results,” Burke added. “The prime minister is dead wrong. Guyana’s Chief Elections Officer doesn’t work for her. Her blatant disrespect crossed the line."

He continued: “Furthermore, she demonstrated contempt for the ruling of the Guyana Court of Appeal, which directed GECOM to only count valid votes,” he continued. “More astonishingly, the prime minister violated the rules of judicial independence by commenting extensively on this matter, which is subjudice at the (CCJ) – an organ of CARICOM of which she is chairman.”

The CGID head said that Mottley’s action was “repugnant to the principles of jurisprudence,” stating that “her uninformed comments manifest an improper attempt to influence the outcome of the matter before the CCJ."

Allegations over oil and gas

Burke said that the police and Registrar of Deaths in Guyana conducted separate investigations and confirmed, through immigration records and death certificates that “PPP operatives around Guyana voted for dead people and people who live abroad, whose names remain on the voters list."

The Trinidad-based Caribbean Court of Justice (CCJ), Guyana’s highest court, on Wednesday issued an order that would continue to put on hold the Court of Appeal ruling regarding the disputed elections.

The CCJ will, on Wednesday, begin hearing arguments about whether it has jurisdiction to hear the appeal filed by Jagdeo and the party’s presidential candidate, Irfaan Ali, in relation to a Court of Appeal ruling.