Help! Young mother seeks to break the cycle of poverty 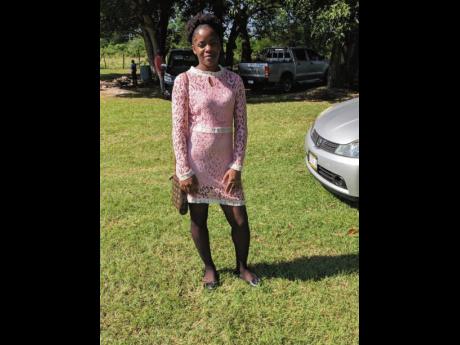 Twenty-one-year-old Daniela Ewan has known struggle all her life. Having lost her father at age six, watched her mother go through numerous hardships, suffered domestic abuse, in every way possible, to make ends meet for the well-being of her child.

Ewan grew up in Clarendon but now resides in Manchester as a result of her efforts to pursue an associate degree at Northern Caribbean University (NCU). But the journey has been far from smooth sailing, and the young mother is hoping that she will see the light at the end of the tunnel and that her child does not one day experience similar hardships.

“Growing up, I lived with my two little sisters, two older brothers, and my mother. Life didn’t start out great for my mother with all of us, eight children (one deceased), containing two sets of twins, my older brothers and myself and twin sister, who passed away shortly after birth due to being born with a cleft palate.” Ewan said.

She added: “Tragedy first struck her when our house was burned down when she was pregnant with her second set of twins (my sister and I), and she had to start from scratch. My mother did every type of work she could to take care of us - mason work, washing, cleaning, combing hair, and babysitting.”

Ewan lost her father, who was battling cancer, and she was left with just her mother and siblings to endure the harsh realities of this world.

“Five years later, things started looking up for us financially. My mother got a good 8 to 5 domestic job and was able to upgrade from the one room, to two rooms, an inside bathroom, kitchen, and living room. We were OK for some years until my mother’s boss fell ill and passed away. She had to use up her savings to take care of us and was now going back to doing her day’s work.”

Despite the circumstances, Ewan completed her secondary education with five Caribbean Secondary Education Certificate subjects, including mathematics and English, and her dream to open a homeless shelter and to ultimately work in law enforcement never waned.

“I met and started a relationship with a guy from my community. We were doing great for almost a year until my mother found out about us and was not pleased. Things escalated quickly, and I ended up living with him at age 18. Things, however, got sour in the relationship and Ewan was forced to move out.

“I went to my brothers, who were staying with a church sister, and they took me in. A few days passed, and I had been expecting my menstrual cycle and I knew something was not right. The church sister was also worried because she didn’t want anyone coming to her place of residence causing trouble. I knew that I might be pregnant and packed up and went back. He welcomed me back, not asking why I came back. A week later, I got a call to do my final medical to join the Jamaica Defence Force, and it was there I found out I was definitely pregnant,” she told Family & Religion.

Ewan said she told her then partner that she was pregnant and the abused stopped – for a short period – but it became clearer to her that the relationship and how she was living was not sustainable, and she left, for good this time.

“We had little to no communication throughout my pregnancy, and he was called to sign his son’s birth paper as well see and hold his son, who he fell in love with. He was shot and killed by police when my son was one month old for reasons I’m unsure of till this day.”

Ewan later started the application process to the Jamaica Constabulary Force but said she was told that her son needed to be two years old before she could apply.

“I decided to educate myself. I applied for a two-year course – crime and security management – and I got accepted at NCU (Northern Caribbean University). I then applied for a job on campus, which I got accepted to do, and that was the beginning of a new beginning for me. I worked enough money so that I would be able to start classes the January semester of 2019,” said Ewan.

She said that she is committed to doing this degree for her mother and her son, but she recently had to sit out due to financial constraints.

“I would appreciate some help for my son because it is just my mother, and she has to hustle to help us. I had a weekend job that helps out, but I’m not sure when and if I’ll be called back to work. My rent is my biggest concern at the moment, along with essentials for my son and food. It’s hard right now on my mother to be providing for two households, and she has my little sister as well going to school. I would also love some assistance with a laptop to complete my studies.”