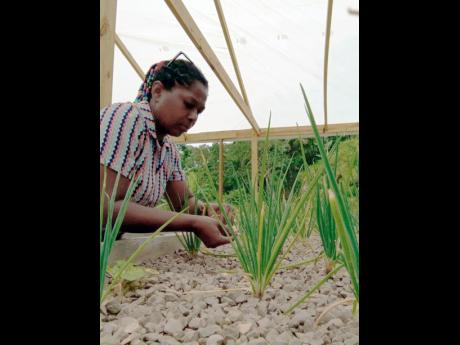 Margaret Lothian is a teacher of 31 years who is now contemplating a career change, following her recent involvement in a community project on aquaponics farming.

“I’ve been acting as vice-principal for the past two years. I have been in teaching for almost 31 years, and right now I would leave it to do aquaponics farming full- time,” said Lothian, who teaches at Aenon Town Primary in Clarendon.

She is one of several community members who have been participating in an aquaponics project funded by the Adaptation Programme and Financing Mechanism (AP&FM) Project of the Pilot Programme for Climate Resilience (PPCR). The AP&FM is administered by the Ministry of Economic Growth and Job Creation, with funding from the Climate Investment Funds through the Inter-American Development Bank.

The Aquaponics Farming Project is operational in five rural communities: Aenon Town, Ritchies, Alston, Johns Hall, and James Hill in the Upper Rio Minho Watershed Area of Clarendon. The five communities have a combined population of over 10, 333 persons and are operating their new aquaponics systems through community development committees.

“Aquaponics is an innovative farming technique that combines aquaculture (fish farming) with hydroponics (soil-less crop production). It is a method that boosts crop production up to 10 times higher than traditionally cultivated plots of equivalent size.

It uses 85-90 per cent less water and no chemical fertilisers or pesticides. It uses low energy consumption, providing year-round crop production and calls for much less labour than traditional farming, making it much more attractive for vulnerable groups such as persons with disabilities.

The aquaponics project started in December 2018 and is part of the activities undertaken to reduce Jamaica’s vulnerability to climate change.

Even before COVID-19, the island has been experiencing impacts, such as stronger hurricanes, severe flooding, prolonged droughts and sea level rise. Between 2001 and 2012, Jamaica experienced 11 storm events (including five major hurricanes) and several flood events, amounting to loss and damage of some J$128.54 billion.

Some of the new systems are recently completed, but already, farmers have reaped crops and sold at farmers’ markets, Lothian said. The options for marketing are many.

“We have ALEX (a Government of Jamaica-run project to distribute fresh farm products); there is the farmers’ market; and other options are available to us,” noted Lothian.

“The successful planting out of our grow beds with different crops such as pak choi, cucumber, scallion, strawberry and tomato; raising the fish and watching them grow from fingerlings to sizes including quarter-pound; successfully reaping and selling crops; and getting community persons involved in the project,” the teacher added, noting what she considers project achievements to date.

Still, the aquaponics project is not without its challenges. Lothian pointed to praedial larceny, farmers needing water to keep the system going, and the difficulty of finding time to spend on the farm as being among them.

However, with so many opportunities available to market the output, the teacher is thinking of making a career switch so she can have more time.

“Aquaponics farming is a great way to farm. The impact on the lives of individuals is significant as they have learnt a climate-smart way to grow crops without destroying the environment. It offers a fast income, and it’s not as taxing on the body as farming in the grounds,” she said.

“Aquaponics has been helping us to adapt to climate change. This system does not use as much chemicals as regular farming does, and whatever is used on the crops has to be safe for the fish. There is no need to slash and burn and release harmful substances into the atmosphere. The system also uses less water than regular farming as the water is recycled,” she added.