PNP vows to hold referendum on whether to remove Queen, if elected 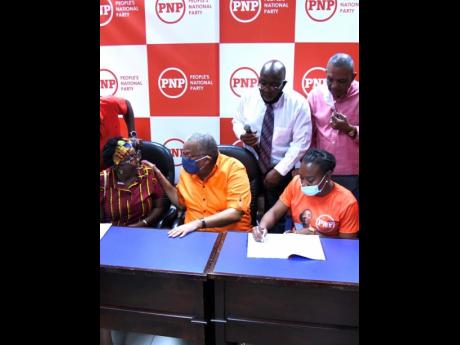 Vice president of the People's National Party (PNP), Angela Brown Burke (seated left) in conversation with PNP president, Dr Peter Phillips, during a meeting held at The University of the West Indies, Mona campus earlier today. Seated beside Dr Phillips is, Krystal Tomlinson signing the PNP's Declaration Against Corruption. Behind Dr Phillips is party chairman, Fitz Jackson and Member of Parliament for Clarendon Northern, Horace Dalley (standing right). The party presented its 63 candidates to contest the general election during the meeting and vowed to remove Queen Elizabeth II as Head of State.

As the election temperature continues to rise, the People’s National Party (PNP) today announced that it if it forms the next government, it will hold a referendum on whether to remove Queen Elizabeth II as Head of State.

The idea has long been floated by both the Jamaica Labour Party and the PNP.

However, this time, the PNP is promising that a vote would be had within 18 months of taking office.

This and other priority items were disclosed by party president Dr Peter Phillips during a meeting held at The University of the West Indies, Mona campus.

At the announcement, party faithfuls stood and applauded the proposal, although many would have heard similar announcements before.

Prime Minister Andrew Holness, upon assuming office in 2016, included a proposal to make the island a republic in the 2016/2017 legislative agenda.

“Jamaicans have embraced the Queen and embraced our legacy in terms of the laws and the system of governance we have, but the deep burning desire we have for full independence still exists," the prime minister said.

Former Prime Minister, Portia Simpson Miller, after taking the oath of office in 2012, had told the more than 8,000 guests seated on the sprawling lawns of the colonial mansion that 50th anniversary of Jamaica's Independence from Britain would be a time for reflection on the lessons of the past.

"As we celebrate our achievements as an independent nation, we now need to complete the circle of independence. In this regard, we will, therefore, initiate the process for our detachment from the Monarchy to become a republic with our own indigenous president as head of state," she had said.

“Ending the apartheid education system by making quality education, universally affordable and accessible to every child by upgrading some schools and improving conditions for teachers,” he listed.

He also promised “providing access to free or affordable health care through a universal health insurance scheme,” if the party were to form the next Government.

During the meeting, the party presented its slate of 63 contenders who will battle against their JLP opponents for the right to sit in Gordon House.