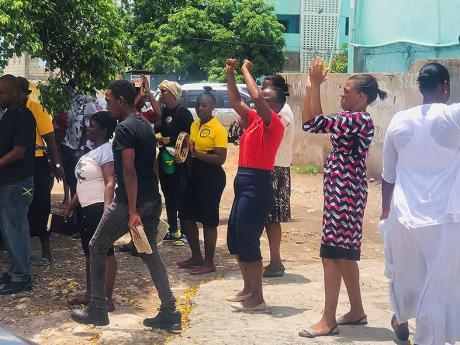 HER HUSKY voice thundered as she stretched the two-powered speakers to the limit. The 60 or more mostly women, along with a few young men and mothers with two, three or four children in tow, bellowed in maskless unison answering every call of the woman in white, sweating as she stomped her way through a fiery streetside sermon.

Apostle Christene McLean was in full flight, and no mask-wearing or social distancing guidelines were going to stop her.

“Repent!” the apostle shouted, using every cubic centimetre of air in her lungs as she made her case.

“Unuh ah talk bout corona? Obeah kill man! Accident a kill man! All kinda disease a kill man,” McLean said defiantly, daring the authorities to lock her up for not wearing a mask and hosting her wayside church service along Darling Street across from the Coronation Market.

A second wave of COVID-19 has swept across Jamaica in August through September, racking up multiple new one-day records. There have been 2,822 coronavirus cases and 27 deaths, as at Wednesday, in the northern Caribbean island.

Despite warnings from government officials and public-health experts, many commuters breach the Disaster Risk Management Act, the legislation that governs the wearing of masks and other protocols.

McLean is the founder of the City of Refuge Endtime Prophetic Ministries out of St Ann’s Bay, St Ann. Since May, she has been waging a crusade of defiance against public-health disaster risk management requirements for wearing masks, maintaining social distancing of at least six feet, and a ban on church services or assemblies of more than 20 persons.

For Thursday’s midday service, McLean brought her 20-foot-by-20-foot tent, gold cloth-adorned pulpit, a drummer and keyboardist, and a full-size mixing board to control her cordless microphone and other sound equipment.

Four young men who formed part of her crew held on desperately to the legs of the tent, which seemed to be seconds way from floating off with the stiff breeze. McLean managed to capture some of the persons who had earlier busied themselves with election day activities. Bell-ringing bodies hung out of windows waving at McLean’s assemblage.

The audience was closely bunched under the broad canopy of a ficus tree. None were wearing masks and social distancing was blowing in the wind, as everyone chanted rhythmically to their pastor’s every word.

“Repent! Repent!” McLean exclaimed as her followers answered, with the band chiming in.

McLean inveighed against the authorities, asserting that it is the “Holy Ghost-run church,” rather than the Government, that had mandated that gatherings of more than 20 persons are prohibited and that face masks be worn in public.