Virgin Atlantic is back! - Airline returns to Jamaica with aircraft equipped with electrostatic fogging system 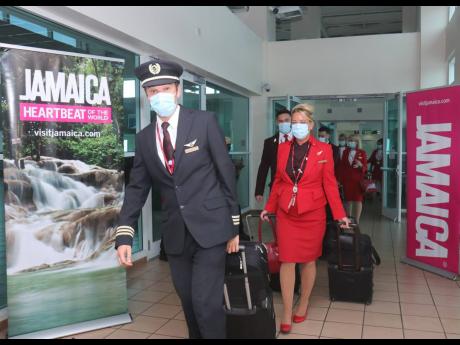 The British carrier, which landed a brand new Dreamliner Boeing 787-900 aircraft at the Sangster International Airport in Montego Bay last Friday, with 192 passengers and 10 crew members, is equipped with an electrostatic fogging machine used by ground teams to disinfect cabins before each flight.

This is the carrier’s first commercial flight bringing tourists and Jamaicans from London Heathrow in the United Kingdom to Montego Bay, since Jamaica closed its borders in March as a result of coronavirus, which decimated the aviation industry, grounding several planes and taking millions of jobs in its path.

Although there remains uncertainty in the market, Virgin has designed the aircraft to protect passengers from contracting the virus. “Air on the aircraft flows from ceiling to the floor, ensuring safety in the cabin,” Hubbard explained.

The British carrier will operate two days per week, Tuesdays and Fridays, moving to three days come November 1, when the winter tourist season officially commences. “As of November 1, Sundays will be added, and the route will be operated until March 2021,” said the airport manager.

The dynamics of the virus could affect the commitment, he admitted, noting that Destination Jamaica was critical to Virgin. The aircraft on the Jamaica-UK route has a carrying capacity of 249 passengers, with space for an isolation area, for those who may become unwell in-flight.

On last Friday’s flight, the middle seats were not used as a courtesy to customers, Hubbard pointed out, stating, however, that this was not mandatory, and could change based on bookings.

In addition to the filtered air circulating on the aircraft, passengers are given non-vented masks in the Virgin health kits, and there is also a maximum period of time after which the crew will have passengers change their masks, explained the airport manager.

Chief executive officer at MBJ Airports Limited, operators of the Sangster International Airport, Shane Munroe, spoke of the importance of the return of the airline, stating that the facility was ready to welcome the various carriers on their return.

He said not only Sangster, but the entire tourism sector welcomed the economic boost with the return of Virgin.

“All safety and health protocols established by the Government are strictly enforced, allowing international carriers such as Virgin to feel safe coming the airport. Their passengers’ exposure to COVID-19 is minimised in our facility, as we are equipped to handle any eventualities,” said Munroe.

In the meantime, the Jamaica Tourist Board’s eastern European representative, Gregory Shervington, in a statement to the trade, said this move by Virgin allows for seamless connections to occur from all the major Continental European cities, including Frankfurt, Dusseldorf, Munich, Berlin in Germany; Madrid and Barcelona in Spain; Brussels, Belgium; Paris, France; Moscow, Russia; Rome, Italy; Vienna, Austria, and Amsterdam in the Netherlands.

He noted that bookings had to be done via travel agents to get access through some of the airports listed.