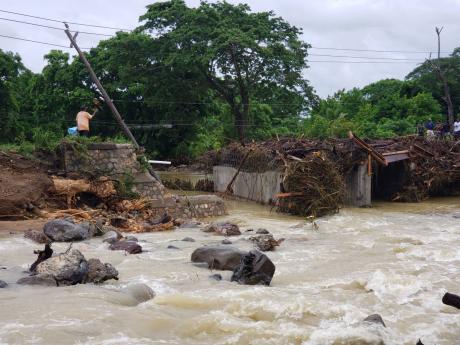 shanna monteith
In this August 2020 photo, a section of the triple cell box culvert being built to replace the old Coley Bridge is seen along the Font Hill main road in St Thomas. The bridge is not completed, resulting in residents of Font Hill, Georgia and surrounding communities in St Thomas been marooned. Tthe citizents say they are at their wits’ end.

Displaced yet again by the floodwaters of the Dry River, despondent residents of Font Hill, Georgia and surrounding communities in St Thomas are at their wits’ end.

Though grateful for the new bridge being built to replace the badly damaged Coley Bridge in the area, the residents, who are marooned every time it rains with water completely disintegrating the detour route, are concerned that the construction is taking too long.

Calling on the necessary authorities, Fradian Murray, of New Monkland in the area, said:“Will it take the death of an expectant mother who’s marooned at home or the sweeping away of a vehicle filled with residents for work on the bridge at Font Hill to be expedited? This is a matter of health and wellness and safety. The resources are already on site, just push for the work to be done.

“Work needs to be happening day and night on the bridge. That level of diligence has been seen in the urban areas – aren’t the tax dollars, lives and ease of living of rural residents just as valuable?”

Murray, who now works and lives in Kingston, told The Gleaner that she is deeply concerned about the safety of those still living in the area, including her father, a taxi operator who travels to and fro the area each day.

She also shared that the frequency with which the people in the area are being marooned have stunted production in the affected communities.

“Employees are missing work, businesses have come to a halt, and patients have missed appointments. Taxi operators are feeling the pangs, especially with damage to their vehicles. Last Tuesday night, residents were stranded from about minutes after 7 until 10 p.m., waiting for tractors to clear the path so they could go home. The rain and the water is unpredictable and all that needs to be done is work on the bridge, overtime,” she said.

Murray was one of many who raised concerns about the impassable main road to communities ,which also include Trinityville and Cedar Valley, each time it rains.

The structure at Font Hill is one of several being built along the Morant Bay to Cedar Valley main road as a part of the Southern Coastal Highway Improvement Plan.

Keniel Headman, who is stranded in his hometown of Trinityville, also expressed disappointment with the quality of, and pace at which the works are being done, especially given the hurricane season.

“A single-lane bridge was demolished from the site where the new one is being built. The question is, why didn’t they take a similar approach to the ones along the Morant main road, to build one side of the new bridge, then at that point demolish the old bridge and build the other side? At least we would be able to travel to and from without an issue,” Headman said.

“Another major concern is, why is it that a bridge was removed and a box culvert being built to replace it?

That is a dry river and not a gully! I believe that more thought needs to be placed into the structure being placed there, and that the work be expedited. I cannot be missing work due to poor planning.

The road has been cut off for more than one day, and once it rains the temporary structure is washed away. What about emergency situations? We are stuck,” he added.

Justice of the Peace Michael Johnson, who also lives in Trinityville, joined the call to the authorities for assistance.

“I am appealing to the prime minister. We want somebody to talk to. We go down to where the place [was] cut off on Friday and you don’t see anybody.

Up until now (Saturday morning) we have nobody to answer us regarding the bridge at Font Hill. Nobody is talking to us,” Johnson said. “We are marooned and nobody is saying anything. We need help.”