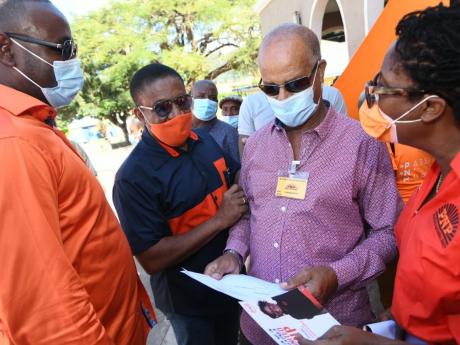 Dr Dayton Campbell this afternoon beat back the challenge of Raymond Pryce to be elected general-secretary of the People's National Party (PNP).

Two hundred and eighty-six of 336 members of the National Executive Council (NEC), the party's highest decision-making body outside of its Annual Conference, elected the men during a meeting at Jamaica College in St Andrew.

Campbell amassed 147 votes to the 138 received by Pryce, a former deputy general-secretary.

Attorney-at-law Jennifer Housen, who had publicly thrown her hat into the ring for the position for general-secretary, was not nominated.

“I am a party man. I was born in this party, grew up in this party and I will be here until I die,” Paulwell said following the announcement of the results by Horace Dalley.

He maintained that he would be loyal to the leadership of the party.

And Campbell said his focus will turn to making the party "winnable for the next election."