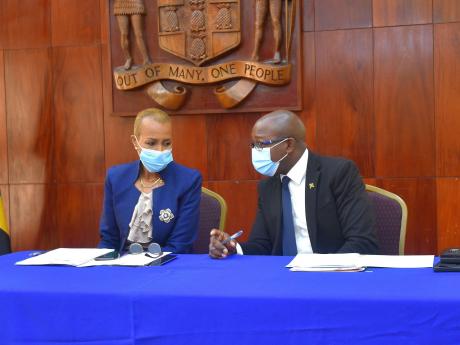 The Government is to roll out a programme aimed at safely disposing of the millions of used tyres generated in the country annually, which will result in a reduction in costs associated with storing them.

This follows Cabinet’s approval of the National Programme for the Environmentally Sound Management of End-of-Life Pneumatic Tyres.

End-of-life tyres are those that could not or were not reused for their originally intended purpose and were not retreaded.

These used tyres can be used as raw materials for co-processing in cement kilns, in asphalt mix for road construction, as well as the construction of sports grounds, playground surfaces, and artificial reefs.

Providing details on the initiative during a virtual post-Cabinet press briefing on Wednesday, Minister of Housing, Urban Renewal, Environment and Climate Change, Pearnel Charles Jr., informed that the programme started with a pilot last year.

“[The pilot] saw the Ministry of Economic Growth and Job Creation and the [then] Ministry of Local Government and [Community] Development collaborating with the Carib Cement Company to undertake a programme which saw the transportation and offloading of these tyres at the Rockfort facility for them to be used for an alternative purpose,” he said.

“In addition, we will be advancing a comprehensive public education and awareness campaign as a component of each phase of the national programme, and consideration will be given to the promulgation of regulations under the National Solid Waste Management Act, 2001 to govern the management of the end-of-life tyres across the island, NSWMA (National Solid Waste Management Authority) being the implementing agency,” he said.

He further pointed out that implementation of this programme to properly manage used tyres is crucial, as it not only reduces the Government’s operational cost to store them but addresses serious public health and environmental impacts associated with the long-term storage of these tyres at disposal sites across the country, such as the leaching of compounds from tyres that contaminate soil, ground and surface water.

In the meantime, Minister of Education, Youth and Information, Fayval Williams, informed that provisions will be made for the allocation of approximately $43 million per annum over a period of 10 years to carry out the programme, commencing this fiscal year.

“The $43 million will be evenly apportioned in the recurrent budgets of the Ministry of Local Government and Rural Development and the Ministry of Housing, Urban Renewal, Environment and Climate Change, to support the execution of the national programme,” she said.