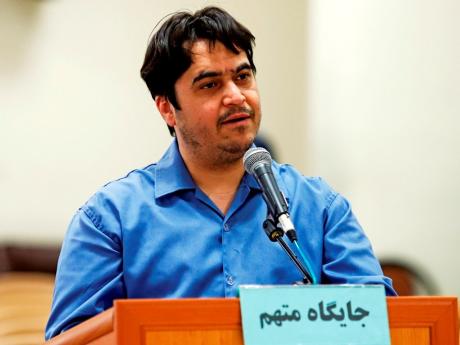 In this June 2, 2020 file photo by the Associated Press, journalist Ruhollah Zam speaks during his trial at the Revolutionary Court, in Tehran, Iran. State television and the state-run IRNA news agency say Zam was hanged early today, months after he returned to Tehran under mysterious circumstances (AP photo).

(AP)- Iran today executed an exiled journalist over his online work that helped inspire country-wide economic protests in 2017. The execution has taken place a little more than a year after authorities tricked him into travelling to Iraq, where he was abducted.

Ruhollah Zam, 47, was one of several opposition figures successfully seized by Iranian intelligence operatives abroad in recent months, as Tehran struggles under the weight of US sanctions.

Kidnapping and executing Zam, who lived in Paris under what Iran described as French government protection, likely will further chill an already-scattered Iranian opposition across the West. It also comes as Iran tries to pressure France and other European nations over the collapsed atomic accord in the waning days of President Donald Trump’s administration.

Zam’s “execution is a deadly blow to freedom of expression in Iran and shows the extent of the Iranian authorities’ brutal tactics to instil fear and deter dissent,” warned Diana Eltahawy of Amnesty International.

Iranian state television referred to Zam as “the leader of the riots” in announcing his execution by hanging early Saturday. In June, a court sentenced Zam to death, saying he had been convicted of “corruption on Earth,” a charge often used in cases involving espionage or attempts to overthrow Iran’s government.

Zam’s website AmadNews and a channel he created on the popular messaging app Telegram had spread the timings of the 2017 protests and embarrassing information about officials that directly challenged Iran’s Shiite theocracy.

Those demonstrations, which began at the end of December 2017 and continued into 2018, represented the biggest challenge to Iran’s rulers since the 2009 Green Movement protests and set the stage for similar mass unrest in November of last year.

The initial spark for the 2017 protests was a sudden jump in food prices. Many believe that hard-line opponents of Iranian President Hassan Rouhani instigated the first demonstrations in the conservative city of Mashhad in north eastern Iran, trying to direct public anger at the president. But as protests spread from town to town, the backlash turned against the entire ruling class.

Telegram had shut down the channel over Iranian government complaints it spread information about how to make gasoline bombs. The channel later continued under a different name. Zam denied inciting violence on Telegram at the time.

Zam himself had fled Iran after the 2009 protests, heading first to Malaysia and then to France. While Iranian authorities have never described how Iran’s Revolutionary Guard detained him, Amnesty said he was seized on a trip to neighbouring Iraq, where the Guard has wielded deep influence since the 2003 US-led invasion that toppled Iraqi dictator Saddam Hussein.

“I made a deal with God, I have no worries, these people brought me to Karbala, but did not allow me to visit the shrine,” the Instagram post quotes the younger Zam as saying. Karbala is home to the shrine of Imam Hussein, an important pilgrimage point for Shiites.

The post added: “I told him, ‘Don’t worry, Imam Hussein is in all visitors’ hearts, he is with you.’”

The cleric said he only was allowed to visit Tehran’s Evin prison on Friday to see his son after agreeing with authorities not to tell him his execution loomed. Iranian media did not acknowledge the post.

France had criticised his death sentence as “a serious blow to freedom of expression and press freedom in Iran,” meanwhile, Reporters Without Borders, a group that campaigns for press freedoms, said Zam’s hanging was a “new crime of Iranian justice.”

Sherif Mansour of the Committee to Protect Journalists said Zam’s execution had seen “Iranian authorities join the company of criminal gangs and violent extremists who silence journalists by murdering them.”

“This is a monstrous and shameful act, and one which the international community must not let pass unnoticed,” Mansour said.