JMMB joins forces with charities to share love at Christmas 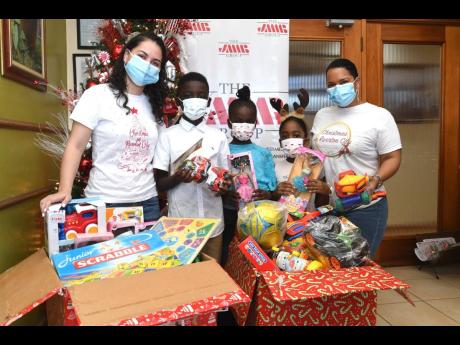 Contributed
Co-founders of #ChristmasInRiverton toy drive, Joanna Marzouca (left) and Alexisse Chin-Tufail (right) are excited that little Noah and Jordanne Williams and Jolie Dixon took the JMMB Joan Duncan Foundation’s #PayItForward challenge along with their mothers, Felecia Williams and Janene Dixon and donated toys to the charity. The children made the donation alongside the JMMB Group, its team and other donors, during a handover ceremony recently at the JMMB Group head office.

The quote “touch one, touch a thousand” aptly describes the philosophy behind JMMB’s Share the Love initiative that last year saw the company, along with its philanthropic arm JMMB Joan Duncan Foundation, joining forces with three charities to touch the lives of over 1,000 vulnerable individuals.

Through a partnership with Kiwanis Club of Liguanea, #ChristmasInRiverton toy drive and Future Hope charity, senior citizens from Liguanea communities; children in Riverton City and neighbouring communities, as well as homeless individuals in the Corporate Area received some much-needed Christmas cheer in the form of care packages, toys, meals and hygiene packages.

Alexisse Chin-Tufail, co-founder of #ChristmasInRivertonCity toy drive, in welcoming the JMMB team back as a partner for a second time, said: “We are happy for this partnership with JMMB and our other corporate and individual donors that have helped to not just sustain this effort, for seven years, but allowed us to extend the love and Christmas cheer to more children, growing from 200 children, to this year catering to more than 800 children. The support is indeed heartening as companies and individuals have not allowed the challenges of COVID-19 to steal the true meaning and spirit of Christmas. She added: “With this support we are further encouraged and look forward to touching the lives of even more children this year.”

Group chief marketing officer (CMO) at JMMB, Kerry-Ann Stimpson, outlined: “In recognising the challenges that many individuals faced last year, especially the elderly and children, we wanted to ensure that we lent our support to organisations like these, to bolster their efforts and ensure that the often overlooked members of our society receive some good cheer.”

The CMO added: “Through partnerships like these we can accomplish so much more and touch more lives. This initiative goes beyond just offering tangible tokens, we are also sharing hope and spreading joy to each person, and not allowing the challenges of the year to dampen our Christmas spirit.”

Previously, JMMB also joined forces with other charities, namely: the Feeding of the 5000, Gift of Love Ja and Feed My Sheep Outreach Ministries during the Christmas season, to spread cheer and give of themselves to inner-city residents and homeless individuals in the Corporate Area. This initiative is in keeping with JMMB Group’s corporate social responsibility guiding principles that calls for the company to actively take a stand for the greatness in everyone.