StJMC clamps down on Greenwood developers 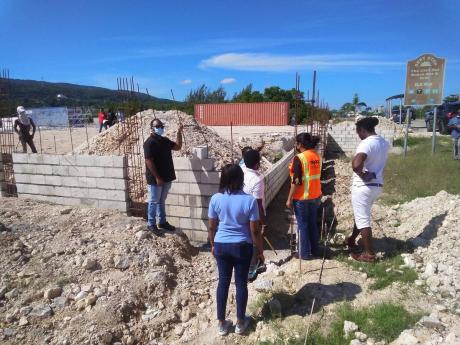 Photo by Hopeton Bucknor
Members of St James Municipal Corporation’s team, along with representatives from the National Environment and Planning Agency and residents of Greenwood, at one of the building sites in the St James community where a stop order was served last Friday.

The St James Municipal Corporation (StJMC) has placed stop orders on several multimillion-dollar developments under construction found to be in breach of the Building Act in Greenwood.

A team from the StJMC, led by Saadi Campbell, deputy superintendent in charge of the Road and Works Department, visited the community last Friday and found a number of breaches as they served developers with the stop orders.

One developer, Robert Stevens, may find himself losing millions of dollars after he was instructed by Campbell to demolish several sections of the perimeter wall at the entrance to his apartments.

Stevens had earlier told The Gleaner that he was in full compliance with the laws, but Campbell later told the developer that his entire site was in breach and he should cease construction immediately.

The road and works deputy superintendent informed the developer that he and other persons in the area were in breach of the Building Act.

“I came here with an open mind to find an amicable solution for the current situation, but we are serving a stop order on this development today, because there are no legal permits granted so far for the construction of this site,” Campbell stated.

Developments in Greenwood took centre stage in recent days after members of the Greenwood Citizens’ Association and business operators in the area alerted the authorities to breaches.

Patricia Burnett, president of the association, told The Gleaner that they had pointed out a number of issues to Stevens, including drainage concerns, numerous times but his failure to address the issues led to them alerting the StJMC and the National Environment and Planning Agency.

Businessman Junior Burnett said that Stevens’ development posed a threat to the environment as he was building in the main water channel which carries floodwaters from the community to the sea. This could spell disaster for residents and business operators, he said.

Stevens, however, believed he was being unfairly targeted.

“I know that I am being targeted by malicious persons in the community of Greenwood, who are threatened that my business may pose a problem to their businesses, and that is the reason why they are coming at me,” he said. “I have gone through all the legal channels and has gotten all the legal documents to go ahead with my construction.”

Anthony Murray, councillor for the Rose Hall Division in which Greenwood falls, told The Gleaner that they were at the location to serve a stop order on Stevens in relation to breaches that have occurred and the concerns that the Greenwood residents have.

The councillor also pointed out that several other developments in the surrounding area have been cited to be in breach of the Building Act, and those developers will also be visited in the next couple of days and served with stop orders.