Shanique Creighton: Healed by His stripes 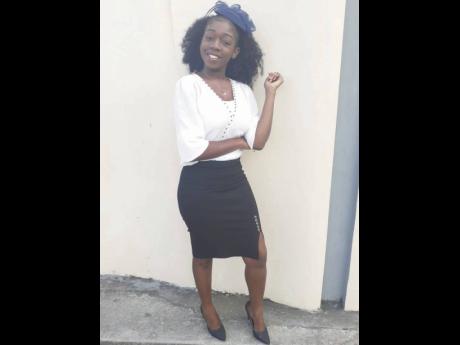 Contributed
Shanique Creighton speaks of the healing power of God.

It was Shanique Creighton’s strong faith in God that resulted in her being delivered from a long-term health issue that had been plaguing her all her life.

Citing Saturday, January 4, 2020, as the day she experienced the authentic healing power of God while at an event in Kingston, the young woman shared what her life was like prior to her life-changing encounter.

“Growing up, I had what most people would refer to as irregular periods or an abnormal menstrual cycle. My cycles were not consistent, and sometimes it would take almost six months after my last period before I’d experience the next. Sometimes the intervals were three months, and other times, two months.

“I even remember going for a medical in high school. The doctors were adamant to perform a pregnancy test because of the long pause I was experiencing in my cycle,” she shared.

Creighton noted that having lived with the abnormalities for years and discovering that others in her family suffered the same fate, she only began to realise that her situation, at the time, wasn’t what God wanted for her as she began developing a stronger relationship with Him.

“A friend of mine invited me to attend Tasting Glory Volume 3, and I went with a great expectancy as the very name of the event grabbed my attention. While there, I partook in communion, and I remember being in the church, Light of the Gentiles International, where the event was held, and they spoke about the healing power of Jesus and the power of communion.

At that time, I had had my last period in October 2019 (three months before), and it never came after that. I was annoyed with my cycle and really needed a change.

I had it in my heart for God to heal me from this issue, and at the event, they were praying for healing, and I placed my hand on my tummy and whispered to God that I needed a change,” she said, adding that she was concerned about her future, being married and having trouble conceiving.

Creighton continued to describe the event as being “filled with the presence of God” and leaving the venue “feeling transformed” and with the assurance that “something happened”.

According to the faithful woman, “The following day after Tasting Glory, my period came, and ever since that day, my periods have been on time, and I’ve never since missed a month. I was surprised at how soon it came, and this lifted my faith in God way up to the bar.

“All honour and praise belongs to God for His healing power and all He did at that event. It was evident that God was in the house, and I am glad I was touched by Him that night, which changed my situation and my life forever.”