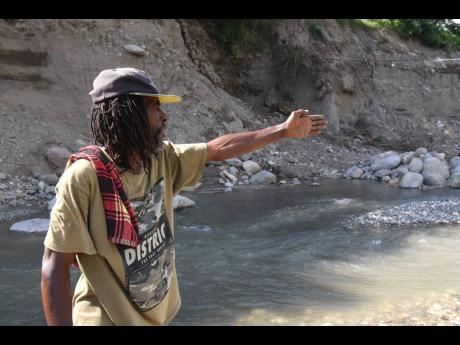 Kenyon Hemans/Photographer
John Rass, who lives on the banks of the Hope River, stands in the river as he explains the problem that the river poses to residents of Harbour View.

Residents of Melbrook Heights in Harbour View, Kingston, are frustrated about sand mining in the Hope River.

The Harbour View Bridge, which sits at the mouth of the river and serves as the only way into Kingston from eastern Jamaica, was destroyed for the third time in 2010 by floodwaters when the Hope River burst its banks.

Quarrying was cited as one of the factors behind the collapse of the bridge. Memories of the extreme weather event rattle the residents, especially in the wake of the devastation wrought late last year when the Chalky River overflowed its bank on to Weise Road in Bull Bay.

One resident who uses the moniker John Rass told The Gleaner that the river course has changed because of the deleterious effect of quarrying on the riverbed.

“It never used to programme this side,” said the resident of 25 years, while gesturing to show the one-time straight direction in which the river flowed historically.

John Rass said the rechannelling of the water caused the river to “start to eat off the banking”.

Pointing to gabion baskets installed on the riverbank by the Government in 2010, John Rass said they would prove to be ineffective if further flooding occurs. His household is in danger.

Rural development scientist and environmentalist Peter Espeut was equally dismissive of the value of the gabion baskets. He is urging immediate action by stakeholders to stop sand mining in Hope’s riverbed.

According to the Ministry of Transport and Mining’s Mines and Geology Division, would-be miners must submit applications requesting inspection of a proposed quarry site to a number of government agencies, including the National Works Agency, National Environment and Planning Agency, the Agricultural Land Management Division, the Environment Health Unit, the Ministry of Health, the municipal corporation, among others.

Before getting the licence from the Mines and Geology Division, Espeut said that an environmental permit is required for legal quarrying.

Several attempts requesting a comment from the Mines and Geology Division have gone unanswered.

One resident of Industrial Village in Gordon Town, St Andrew, told The Gleaner that fish have died because the swimming holes were clogged with sand.