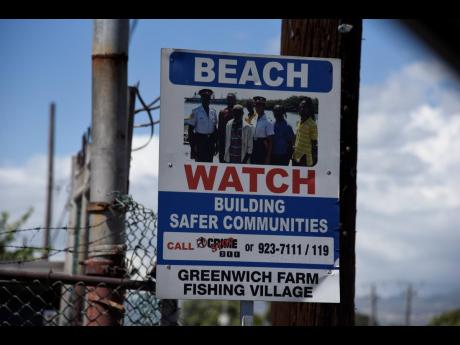 THE DAYS when criminals held sway over the affairs at the Greenwich Town Fishing Village are long gone and the relationship between the fisherfolk and the marine police, as well as their counterparts on land, is very good.

However, chairman of the Greenwich Town Fisherfolk Benevolent Society, Winston Monroe, and president Novelette Mighty, recalled that there was a time when disorder was the norm on the beach.

“The gangster them really take over and then we decided to liberate the beach and went ahead and established a beach watch along the lines of the Neighbourhood Watch in communities,” Mighty told The Gleaner during a recent visit.

However, Monroe recalled that, at that time, the relationship between the fisherfolk and the police was at an all-time low.

“Marine police and the fishers were at total odds, they did not like each other. But things changed after we start to meet regular and we sit down and play dominoes,” he added.

Mighty recalled that Sergeant D. Lyons of the marine police and the former executive director of the fisheries division (now the National Fisheries Authority) were instrumental in ushering in a new period of cooperation between the two factions.

“Mr Kong a the boss and Sergeant Lyons, that gentleman him really work with we, man,” Mighty said.

Today, the marine police are part of the fisherfolk Whatsapp group and hold regular meetings with them, Sergeant Lyons told The Gleaner. He explained that, back then, regular infractions such as people going to sea without their fishing identification card or fishing licence was a regular occurrence.

“They weren’t complying with the law, and the biggest problem we had was that of fishers setting their nets in the fishing channel used by commercial vessels, with about 80 per cent of the arrests being for setting nets in the shipping channel.”

This was a major issue for the mega-liners especially, which did business in the Kingston Harbour and for whom the more time spent loading and offloading their cargo translated to higher costs. The Shipping Association of Jamaica and the Port Authority of Jamaica decided that something had to be done, as the complaints from local pilots who guided the ships into the harbour were growing.

A series of meetings involving representatives of both organisations were held on the beach with the fishers where the impact of their actions were explained and discussions held about the need for cooperation and adhering to the law.

Now, working with the police and other relevant authorities, the Greenwich Town Fisherfolk Benevolent Society has reclaimed their beach from the criminals who once threatened their very existence.