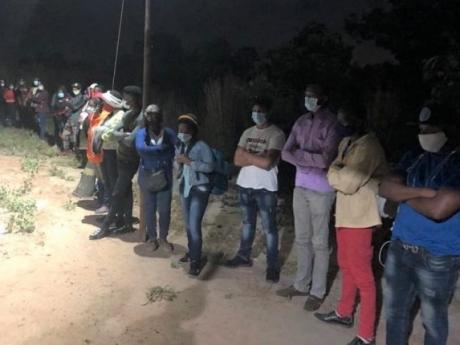 Several Haitians and a Cuban migrant were arrested by police in Brazil early this morning after entering Brazil from Guyana illegally (CANU via CMC photo).

Twenty-six Haitian nationals and one Cuban, all of whom left Guyana and entered Brazil illegally, have been arrested by members of the Brazilian Federal Police.

According to a release from the Customs Anti-Narcotics Unit (CANU) the interception occurred late Friday and early Saturday.

Also arrested were taxi drivers waiting to transport them onwards.

“Some of the Haitians arrived in Lethem during this past week. They were initially denied entry into Brazil, but it was suspected that they would try to use other routes to cross over, hence the information was passed on to Brazilian Counterparts by CANU who then alerted their law enforcement units within the area,” the CANU statement noted.

Recently, Brazil’s Federal Police and CANU signed a Memorandum of Understanding (MOU) through the Ministry of Foreign Affairs in Guyana to share information and conduct joint operations, involving narcotics and other criminal activities.

“This is one of the successes coming out of this arrangement. The movement of persons through unofficial crossings not only poses a security risk, but also a health risk due to the ongoing COVID Pandemic,” the CANU release stated.